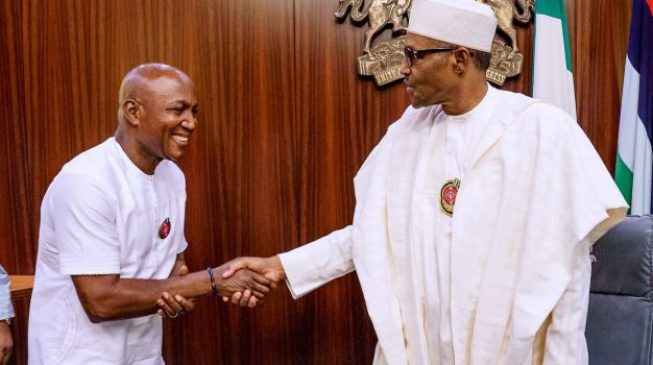 20:38 2019
Print This Article Share it With Friends
👤by Jamilah Nasir  0 Comments
Advertisement

Oshiomhole said this while speaking with reporters after presenting Lyon to Buhari at the presidential villa in Abuja on Monday.

He described Lyon as a very good candidate who made it easy for the APC to put an end to the 20-year reign of the Peoples Democratic Party (PDP).

“We went to present the governor-elect, governor David Lyon to President Muhammadu Buhari. As the President and our father, he has a brand new baby boy who will be sworn- in on Valentine Day February 14, 2020, as governor of Bayelsa State,” Oshiomhole said.

“We thank the president for his fatherly role and he insisted that we must ensure that while we are determined to win the election that we must play by the rule and ensure that the process is transparent and above all the president has always been concern about peaceful election and we were proud to inform him that besides very isolated cases of ballot box snatching, the election in Bayelsa can be described as the most peaceful.

“I believe since 1999, you as very seasoned journalists who have covered elections in Bayelsa in the past, you will agree that this is the only time we can say the election is truly transparent and peaceful.

“Again, our candidate attract supports across the political divide when you see territories and communities where his victory was being celebrated you will agree that not only did he had the support of the APC family, he had support beyond the APC family.

“And of course, the president was very happy that we had a peaceful election in Bayelsa state. But of course, we also know that there was an election in Kogi but that is a matter for another day when we present the governor re-elect.”

Oshiomhole said when Lyon resumes office,  the people of Bayelsa will see the difference between him (Lyon) and Seriake Dickson, incumbent governor of the state.

He expressed gratitude to the people and party members who contributed to the victory of APC in the election.

“For the governor this is a call to selfless service, the more support you get the more the expectations. As they say, to whom much is given, much is expected,” he said.

“When he takes over office in February Bayelsans will see the difference between his government and that of outgoing governor Serieke Dickson.”

TWITTER @thecableng
Copyright 2020 TheCable. All rights reserved. This material, and other digital content on this website, may not be reproduced, published, broadcast, rewritten or redistributed in whole or in part without prior express written permission from TheCable.
Tags
baby boyBayelsaDavid Lyonoshiomhole
Advertisement