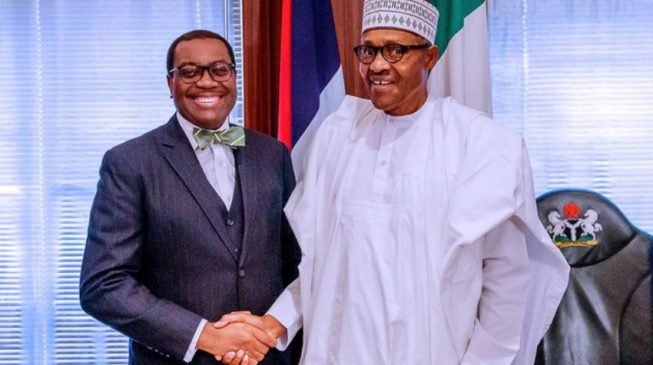 02:58 2019
Print This Article Share it With Friends
👤by Dyepkazah Shibayan  0 Comments
Advertisement

President Muhammadu Buhari has nominated Akinwunmi Adesina for a second term as the president of African Development Bank (AfDB).

Adesina made this known on Sunday while receiving the Emeka Anyaoku lifetime achievement award presented to him by the Hallmark of Labour Foundation.

This comes ahead of the bank’s election scheduled to hold in 2020.

“When asked by former President Goodluck Jonathan to serve as Minister of Agriculture, it was duty calling me to the land of my birth,” he said.

“I served Nigeria to the very best of my ability. I thank God that Nigeria’s agriculture sector witnessed a much-needed transformation at the time.

“With the strong support of President Jonathan and the then President-elect, Buhari, we campaigned very hard for the position of the President of the African Development Bank.

“It was a Nigeria effort, as all hands were on deck. This included our former presidents and heads of state, Gen. Abdulsalami Abubakar, Gen. Yakubu Gowon, Olusegun Obasanjo, former Vice-Presidents Atiku Abubakar and Namadi Sambo, and of course my dear indefatigable sister, Dr Ngozi Okonjo-Iweala, who ran a spirited campaign for me.

“By God’s grace, I was elected President of the African Development Bank on May 28, 2015, exactly 24 hours after my term of office as minister ended.

“The nation jubilated as I became the first-ever Nigerian to be elected President of the bank since its establishment in 1964.

“Once again, Nigeria gave me air in my lungs.”

Addressing journalists at the end of the bank’s annual meeting in Malabo, Equatorial Guinea, the 60-year-old had announced his intentions to contest for a second term in office.

“I will run as a candidate to complete the work we have started,” he had said.

“I understand my responsibilities. I do not work for myself. I work with all of my body to fast track the development of this continent with the support of our donors.

“I am driven by Africa and it is not a chore for me.”

Listing the progress made by the bank during his first term, the Obafemi Awolowo University graduate said 16 million people have been provided access to electricity and 70 million, improved agricultural technologies.

“In all, 181 million people have directly benefited from our investments. I am proud of all my staff and the Board of Directors whose hard work and relentless support have helped make this happen.

“The African Development Bank has continued to maintain its global AAA rating. Last year, the bank was rated the 4th most transparent institution globally.”

In 2017, Adesina was awarded the World Food Prize for his contributions to agricultural development.

TWITTER @thecableng
Copyright 2020 TheCable. All rights reserved. This material, and other digital content on this website, may not be reproduced, published, broadcast, rewritten or redistributed in whole or in part without prior express written permission from TheCable.
Tags
AFDBAkinwunmi AdesinaMuhammadu Buhari
Advertisement