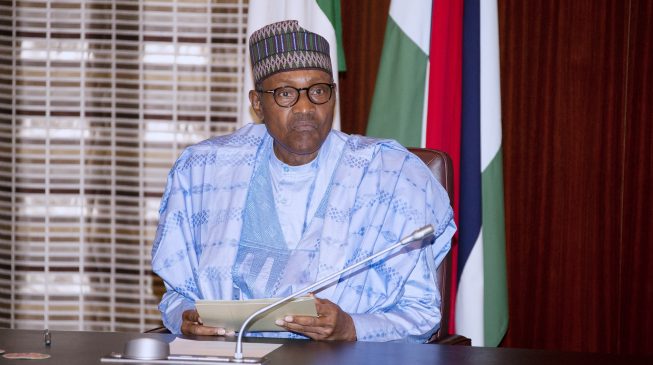 16:28 2019
Print This Article Share it With Friends
👤by Ebunoluwa Olafusi  0 Comments
Advertisement

President Muhammadu Buhari has signed an executive order to eliminate the practice of open defecation by 2025.

The order, entitled “The Open Defecation-Free Nigeria by 2025 and Other Related Matters Order” was signed on Wednesday.

In a statement, Femi Adesina, special adviser to the president on media and publicity, said the executive order takes effect immediately.

The order stipulates that all public places must have accessible toilets and latrines within their premises.

It also states that the national assembly and house of representatives shall enact laws on the practice with appropriate sanctions and penalties.

“That by this Order, Nigeria is committed to being open defecation free by 2025,” the statement read.

“That the National Open Defecation Free (ODF) Roadmap developed by the Federal Ministry of Water Resources with support from other key sector players across Nigeria be put into effect.

“There is established in the Federal Ministry of Water Resources a National Secretariat called ‘Clean Nigeria Campaign Secretariat’.

“The Secretariat is authorized on behalf of the President to implement this Order by ensuring that all public places including schools, hotels, fuel stations, places of worship, market places, hospitals and offices have accessible toilets and latrines within their premises.

“All Ministries, Departments and Agencies (MDAs) of government shall cooperate with the Clean Nigeria Campaign Secretariat.

“The National Assembly and the State Houses of Assembly shall enact legislation on the practice of open defecation with appropriate sanctions and penalties.

“All development projects shall include construction of sanitation facilities as an integral part of the approval and implementation process.

“The Secretariat shall terminate when Nigeria is declared Open Defecation Free.”

According to the statement, the executive order was made against the background that Nigeria is ranked second among the nations in the world with the highest number of people practicing open defecation estimated at over 46 million people.

It said the practice, which has had a negative effect on the populace, had contributed to the country’s failure to meet the United Nations Millennium Development Goals (MDGs).

The president had described the statistics on open defecation and access to pipe-borne water service and sanitation as “disturbing” and had declared commitment to implement the National Water Supply, Sanitation and Hygiene (WASH) Action Plan.

In 2018, Buhari declared state of emergency on the WASH sector and subsequently launched a national campaign for Nigeria to eliminate open defecation by 2025.

TWITTER @thecableng
Copyright 2020 TheCable. All rights reserved. This material, and other digital content on this website, may not be reproduced, published, broadcast, rewritten or redistributed in whole or in part without prior express written permission from TheCable.
Tags
2025executive order 009Muhammadu BuhariOpen defecation
Advertisement