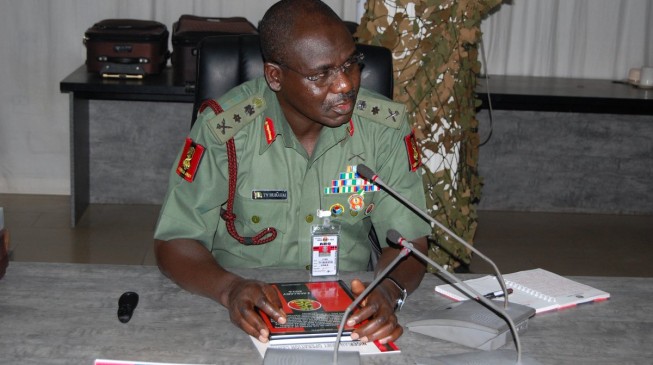 17:22 2019
Print This Article Share it With Friends
👤by Ebunoluwa Olafusi  0 Comments
Advertisement

Tukur Buratai, chief of army staff, has asked for improved funding for the army to tackle the challenges encountered in the fight against insurgency.

Buratai made the call at the opening of the 12th biennial training conference of the Nigeria army finance corps in Uyo, on Monday.

The theme of the conference was ‘expanding roles of the Nigerian Army in internal security operations: funding imperatives’.

The army chief said the current funding for the army was “inadequate” in view of the roles it was playing in the internal security of the nation.

He said public sector financial reforms, such as cashless policy, treasury single account, and integrated payroll and personnel information (IPPIS) have prevented leakages in the sector.

The army chief said some of the policies would affect the optimal performance of the army and its core competencies if not well managed.

“The Nigeria army will continue to ensure prudence and accountability in the utilisation of available resources,” he was quoted to have said.

“To this end, I authorised the establishment of the directorate of audit and financial management (DAFM), which reports directly to my office. The essence is to ensure judicious application of all appropriated funds disbursed to the Nigeria army formations and units.

“The DAFM has supported the army in deriving value for money in its financial transactions and application of funds.”

Buratai added that the army has devised new strategies to combat insurgency in the country.

He also asked security operatives to remain committed to global best practices by adhering strictly to the rules of engagement and code of conduct.

TWITTER @thecableng
Copyright 2020 TheCable. All rights reserved. This material, and other digital content on this website, may not be reproduced, published, broadcast, rewritten or redistributed in whole or in part without prior express written permission from TheCable.
Tags
ArmyFundinginsurgencyTukur Buratai
Advertisement