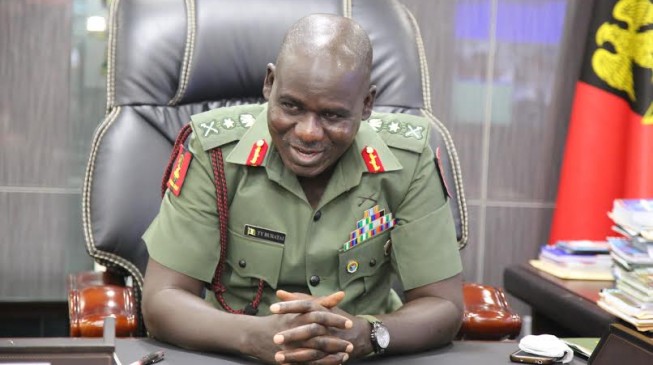 18:45 2019
Print This Article Share it With Friends
👤by Jamilah Nasir  0 Comments
Advertisement

Tukur Buratai, the chief of army staff, says the planned Operation Positive Identification (OPI) is not different from other military operations and would not disrupt the daily lives of Nigerians.

Represented by Usman Muhammed, the chief of civil-military affairs, Buratai submitted a report on the operation to members of the house of representatives committee on army in Abuja on Thursday.

Buratai said the operation, which started on September 22, was launched based on an intelligence report adding that OPI is one of the subsidiary operations ongoing in the north-east.

The house of representatives had called on President Muhammadu Buhari to stop the operation.

“We have exercise Ayama Kpatuma in the north-central, Atilogwu Udor in the south-east and Crocodile Smile in the south-south are aimed at addressing the security challenges in those zones,” Buratai said, explaining that the military has a tradition of initiating operations towards the end of the year to reduce crime during the yuletide.

“It is a training exercise and at the same time, it is a true operation whereby we use the opportunity to carry out activities to checkmate criminality and crime within those areas.

“This time around, we feel that we can extend the OPI to some of these areas where we are going to conduct some of these exercises.

“The exercise is nothing too different, it is something that is going to assist us add value to what we are doing in the northeast.”

Buratai said citizens would not notice any change in their day-to-day activities and that there would not be extra checkpoints or additional troops on the streets. He said the rules of engagement would be thoroughly observed.

He also said the operation was in collaboration with other security agencies including the National Intelligence Agency (NIA) and the Department of State Service (DSS), adding that President Muhammadu Buhari was in support of the operation.

TWITTER @thecableng
Copyright 2020 TheCable. All rights reserved. This material, and other digital content on this website, may not be reproduced, published, broadcast, rewritten or redistributed in whole or in part without prior express written permission from TheCable.
Tags
ArmyBurataioperation positive identification
Advertisement