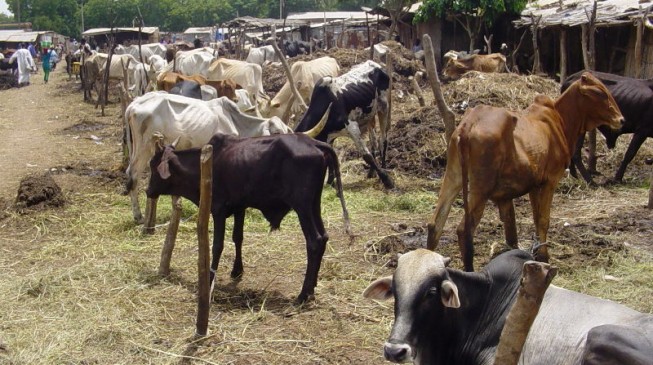 11:14 2017
Print This Article Share it With Friends
👤by TheCable  0 Comments
Advertisement

The Kaduna State Cattle Breeders Association of Nigeria (MACBAN) says vengeance is not the solution to the crisis rocking the southern part of the state.

Maintaining that it is time to state its “own side of the story”, the association said many of its members have also been killed.

It dismissed reports that the entire Southern Kaduna was on fire, and that it had made efforts geared towards restoring normalcy to troubled areas.

“Miyetti Allah Cattle Breeders Association of Nigeria, Kaduna State chapter has been observing various claims and counterclaims by different interest groups concerning the crisis in some local governments in Southern Kaduna, namely Ja’ama, Kaura, Zankon Kataf and Kauru. Some of the claims are not only fictitious but also malicious and far from the truth,” read a statement signed by one Mouftah Baba-Ahmed.

“As an Association whose members have been unjustifiably accused and maligned, we think that it is time for us to tell our own side of the story and set the record straight for posterity sake.

“In 2011, there were post-presidential [election] violence that occurred in the whole state and it affected not only the indigenous Fulani’s in Southern part of Kaduna state but the mobile Fulani’s coming from other areas.

“Initially, we taught it was only our people (indigenous Fulani’s) that were affected by those crisis and we started the process of reconciliation with our neighbours because we’ve been living there for ages in peace and harmony. Therefore we started experiencing, even after signing MoUs and agreements, pockets of attacks and started asking ourselves, are we really sincere with peace reconciliation?”

The group lauded the role played by Patrick Yakowa, a former governor of the state, in resolving the crisis.

“Unfortunately for us at that time, we had one of us as the governor of the state, a man who was willing to sacrifice everything for the peace of not only the Southern Kaduna but the entire Kaduna state —late Sir Patrick Ibrahim Yakowa — and he challenged some of us to find out what actually is the cause. We set up a committee to see what really happened and these were our findings,” it said.

“Let me also clarify that the Fulani pastoralists you hear about are classified into three: the settled nomads (indigenous nomads), semi-settled nomads (those that move from maybe Plateau, they’re somewhere in Barkin Ladi local government area but during dry season they send their children on grazing expedition in Sanga and Ja’ama LGA), then there is nomadic transit, those who are in constant movement. Some of them are from the neigbouring states while some even from neighbouring countries.

“When the governor asked us to find solution to it, we told him the solution would be absolutely difficult because we had to trace those people that were affected.

“He said we should go no matter what it takes because I cannot sit here as a governor working for the state while my own constituency is burning; let’s do it no matter what it takes and we started. I believe that everyone who’s a living witness before the death of Sir Patrick Ibrahim Yakowa knew that normalcy had returned to Southern part of Kaduna state.”

Baba-Ahmed said the committee was able to meet people outside Nigeria who were affected by the problem in Southern Kaduna. He said many of them were willing to fight back, but the peace panel instituted by Yakowa was able to pacify them.

“We traced these nomadic pastoralists to the Republic of Cameroon, and we told them we were sent by the Governor of Kaduna state to come and seek for forgiveness what happened to them. And their leader told us clearly that he’s a pastoralist and about 200 of his cows were killed in Fadiya, Abet at Gidan Maga,” he said.

“He even told us that they have heard that the governor does not like Muslims; but I said I was born in southern part of Kaduna and that we don’t have anybody in southern Kaduna that does not like Muslims. That we’ve been living together and assured them that even in their house they do have disagreement with their family members and that doesn’t mean one does not like his family. And he said on behalf of himself and other members of his group that were affected in the crisis, ‘go and tell your governor I’ve forgiven him’.

“And we returned, just two weeks after our return the governor died and all efforts to make things in succession to support the programme so that we can be able to trace other routes from the other parts fall on deaf ears. And that’s why you see Sanga, Ja’ama, and other parts are the flashpoints up till this moment.”

On the fresh outbreak of violence in the area, he said: “I want to assure you that a cow is just like a bee, it can trace its way; it’s just like water when you build on water passage you know what happen when there is flood it will pass through the rout.

“So the fact that he has a farmland with his crops there does not stop the cows from passing. I want to tell you that if you start from Cameroon to Benin Republic and just ask your cow to go in front, go back they’ll (cows) take you to Benin Republic if you’ve been going there without missing any routes, so that’s what happened.

“An argument ensued between two pastoralists that were trying to pass through the stalk rout with the farmer which resulted into fight, both parties were wounded and were taken to hospital for treatment. And I think one of the Ardo from that area volunteered to pay for the treatment but some youths thought otherwise and organised themselves, killed the Ardo, set him ablaze, burnt about 67 of Ardo’s settlement, and there we go.

“MACBAN, with some well-meaning sons of southern Kaduna, sat down together and started working on peace even up to the stage of signing an agreement. We had a meeting at the palace of chief of Godogodo, we asked all the nomads that were affected by those crisis to return. We were about to sign the agreement when another killing happened again. Four nomadic youths rearing their animals were killed, we started again from square zero. Still on the way some cows, 42 in number belonging to some nomads from Plateau state were killed, that was what happened.

“Later a new dimension was introduced to the issue where people just go out wherever they see a Fulani man with his cows, they attack and kill then. They block roads and stop vehicles, anybody with the sign of Fulani man should be brought out and kill etc. That’s what been happening. In one of the killings, a mining engineer with his brother from Niger Republic, who has signed a MoU with Nasarawa state government was stopped and killed.

“Some nomads returning to Plateau state from Niger state where they went for a function, and somewhere in Denghi and Delmai at the border with Plateau, about thirteen of them were killed in Darade and one of them is still missing, and the vehicle they boarded was completely burnt. We had to quickly go, meet and discussed with them.

“Some Fulani traders returning from Lafiya were followed and tracked from Kagoro and finally got at Samaru, some were killed, but two of them were saved by a Kataf man who hid them in his house for two days before returning them. That’s why we’re saying the idea of revenge and retaliation is wrong. If you want to attack Samaru now to revenge what happened to your brothers you may likely kill that Good Samaritan. So let’s avoid vengeance.

“We call on the entire people of southern Kaduna to forgive what has happened. Both parties should learn to forgive. This crisis will never end if you think you would go and revenge what happened to you, so we’re appealing to all parties to sheath their swords and embrace peace.”

TWITTER @thecableng
Copyright 2020 TheCable. All rights reserved. This material, and other digital content on this website, may not be reproduced, published, broadcast, rewritten or redistributed in whole or in part without prior express written permission from TheCable.
Tags
cattlefulaniGodogodoKadunaMiyetti Allah
Advertisement