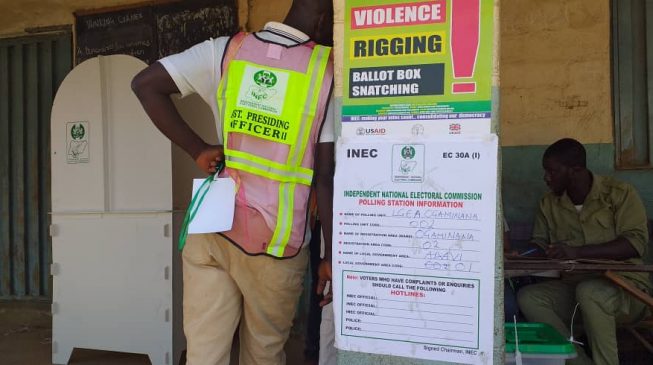 17:48 2019
Print This Article Share it With Friends
👤by TheCable  0 Comments
Advertisement

The Centre for Democracy and Development (CDD) says financial inducement of voters was rampant in Saturday’s election in Kogi state.

In a preliminary report released by its election analysis centre, CDD said vote buying was recorded in different parts of the state despite the enlistment of anti-graft agencies by the Independent National Electoral Commission (INEC).

The organisation said in some polling units, voters were offered as little as N500 to influence them.

“In our report yesterday, we noted the extensive use of financial inducements to affect the outcome of the elections as election officials were offered $1,000 each to buy their conscience. Today, we noted direct financial incentives to voters who were offered money before and after voting,” CDD said.

“Notwithstanding that INEC enlisted the EFCC and the ICPC to assist in curtailing vote-buying, vote-buying was very rampant across the state.

“CDD observers reported that party agents in several polling units engaged in the financial inducement of voters to influence them to vote for the parties.The cost of a vote ranges between N500 and N3,000.

The centre also condemned the widespread violence in the state, citing instances, where journalists and election observers were harassed.

“In the final build-up to the election, CDD had drawn the attention of stakeholders to the very volatile environment and the mostly lawless tactics employed by the partisan actors to win political advantage at all costs. CDD EAC observers reported coordinated disruption of voting across many polling units with hired thugs invading Polling Units, shooting sporadically to scare away voters, and in several cases carting away voting materials.
In Polling Unit 001 in Ward 4, Dekina LGA, CDD observers reported the sporadic gunfire,” the report read.

“Violent disturbances caused by rival party thugs who battled each other over control of the polling environment was reported in Felele and Ganaja areas ofLokoja LGA, especially in Registration Area 08, Oworo, Felele Area, PU 004. In Ankpa 1 Polling Unit (PU) with number 2203-04-0 in Ankpa Local Government.

“CDD observers reported an incident wherein operatives of Federal Special Anti Robbery Squad (SARS) stormed the location of the polling unit and arrested the PDP party agent. This move disrupted voting, as thugs responded by throwing stones in a bid to release the PDP party agent.

“There were also several reports of ballot box snatching; an example is PU 004 Ayingba (PMML Primary School, GRA) where the polling unit was attacked by thugs alleged to be ruling party supporters.

“The heavy presence of security was not enough has a countermeasure to deter trouble makers bent on using violence to subvert the process. Observers and Journalists were all similarly harassed and attacked in several instances. A CDD observer was injured in Ayingba Ward 004 while our partner TheCable journalist was harassed and his phone seized for trying to take a picture off the APC senatorial candidate giving money to two older women who stood by his convoy.

“We indicate below systematic and coordinated violent attacks numerous at polling units and the carting away of voting materials; In many polling units, observers and journalists are being blocked from access and taking photographs in what appears to be an attempt to prevent the gathering of evidence of electoral malpractices.”

It, however, added that INEC officials arrived before 8am in 55.2 percent of the polling units in Kogi.

TWITTER @thecableng
Copyright 2020 TheCable. All rights reserved. This material, and other digital content on this website, may not be reproduced, published, broadcast, rewritten or redistributed in whole or in part without prior express written permission from TheCable.
Tags
CDDEFCCICPC
Advertisement