Chukwueze: The ‘N98m’ Ferrari doesn’t belong to me… I don’t know how to drive 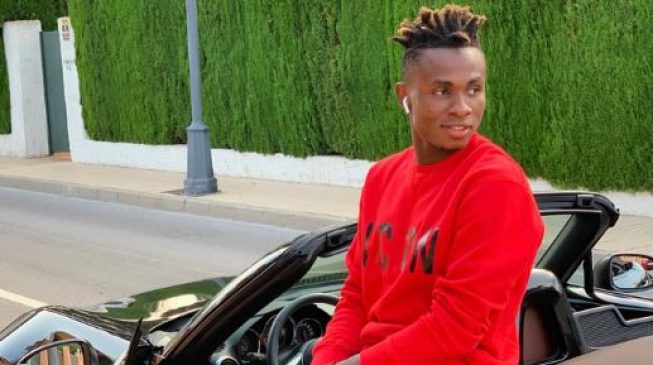 01:02 2019
Print This Article Share it With Friends
👤by Remi Sulola  0 Comments
Advertisement

Samuel Chukwueze, Super Eagles winger, has come out to deny ownership of a Ferrari car he was recently spotted posing with some months ago.

In September, the Umuahia-born football star had taken to his Instagram page to share photos of him sitting on the car – which is said to be worth a whopping “N98,000,000”.

The pictures had gone viral on social media and was greeted with a mixed bag of accolades and backlashes, with many startled as to why the exciting young talent will spend that huge sum on a car.

But in his reaction to the development, Chukwueze told TheCable that the car does not belong to him.

According to him, the vehicle was meant to convey him to training and wherever he wishes to go since he does not know how to drive.

“It was not Samuel that bought the car. That was all. It is not my car,” Chukwueze told TheCable.

“The car was suppose to be taking me to training or anywhere I want to go to because I don’t know how to drive.

“That day, I just posed and took couple of shots with the car.

Chukwueze also said that his first La Liga goal for Villarreal earned him his call-up to the national team.

According to him, it was double blessing for him to have scored on his debut and as well get invited to the Eagles the same day.

The gifted footballer scored his first La Liga senior goal in Villarreal’s 2-2 away draw against Rayo Vallecano on November 12, 2018.

He would get his maiden call-up from Gernot Rohr, Super Eagles technical adviser, for Nigeria’s 2019 Africa Cup of Nations qualifiers against South Africa on November 20, 2018.

“The day I scored my first La Liga goal was the day I came to Super Eagles,” the 20-year-old winger said.

“I got invited to the Eagles that day and it was a double blessing for me.

“The game against Barcelona was not my biggest but the day I scored my first La Liga goal.
“And it was an away goal and I was very happy.”

The former Diamond academy product was 19 years five months and 20 days old when he became the fourth youngest scorer in La Liga in the 2018/19 season.

Vinicius Junior of Real Madrid, Borja Garces of Athletics Madrid and Cucho of Huesca are the other three young players who scored on their La Liga debuts.

Samuel Chukwueze was part of the Nigerian squad that won bronze at the 2019 AFCON in Egypt.

He scored his first senior goal in Nigeria’s 2–1 win over South Africa in the quarter finals of the African showpiece in the summer.

TWITTER @thecableng
Copyright 2020 TheCable. All rights reserved. This material, and other digital content on this website, may not be reproduced, published, broadcast, rewritten or redistributed in whole or in part without prior express written permission from TheCable.
Tags
2019 AFCONGernot RohrSamuel ChukwuezeSportSuper EaglesVillarreal
Advertisement