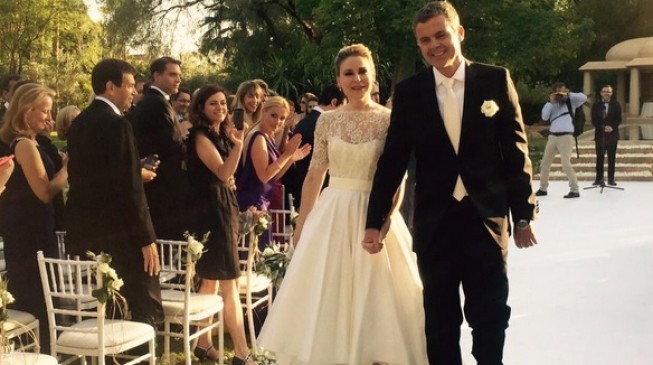 10:46 2015
Print This Article Share it With Friends
👤by Damilola Odunlami  6 Comments
Advertisement

The 45-year-old tied the knot with her lover and colleague on Sunday in Jardin Majerelle, Morocco, and later broke the news on her social media platform:

Just married! Thank you @cstreib for making me the happiest bride in the world. pic.twitter.com/J7fkwx2ZiY

The newlyweds have been receiving congratulatory messages from friends, fans and her CNN colleagues:

@KissMyKassss_ @HalaGorani indeed many congratulations are in order! No wonder Hala has been off our TV screens lately!

@HalaGorani Congratulations Dear Hala Gorani & live under the shadow of love. Mr. @cstreib u r luckiest man in the world, HalaG.is ur wife:)

Gorani was born in the US to French and Syrian parents. She began her journalism career as a French reporter in 1994. Then after a stint at Bloomberg Television in London, she joined CNN in 1998 as an anchor for CNN International’s European breakfast show, ‘CNN Today’.

She received a News and Documentary Emmy for her coverage of the 2011 Egyptian revolution, and she has interviewed several renowned and important personalities. Last month, she was awarded an honorary doctorate by George Mason University.

TWITTER @thecableng
Copyright 2020 TheCable. All rights reserved. This material, and other digital content on this website, may not be reproduced, published, broadcast, rewritten or redistributed in whole or in part without prior express written permission from TheCable.
Tags
Christian StreibCNNHala Gorani
Advertisement

Iran drops 2015 nuclear deal over the killing of Soleimani