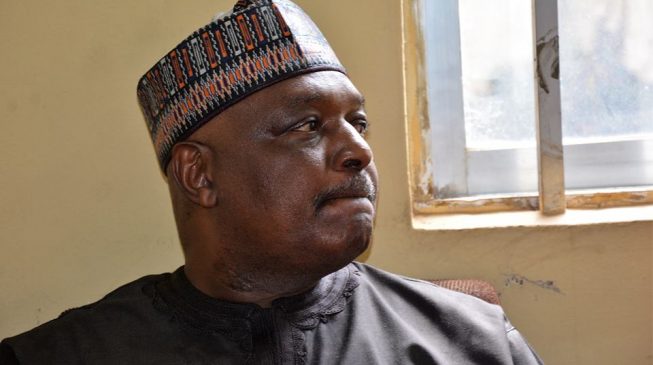 18:20 2018
Print This Article Share it With Friends
👤by Oluwatoyin Bayagbon  0 Comments
Advertisement

A federal high court sitting in Abuja on Wednesday dismissed the bail application filed on behalf of Jolly Nyame, ex-governor of Taraba state.

Nyame is currently  in Kuje prison, Abuja, after a judge handed him a 14-year jail sentence on May 30.

The Economic and Financial Crimes Commission (EFCC) had accused Nyame of criminally misappropriating the funds while he served as governor between 1999 and 2007.

Adebukola Banjoko, a judge, found him guilty of 27 out of the 41 counts levelled against him and jailed him for 14 years without an option of fine.

Olalelakan Ojo,  Nyame’s counsel, had told the court that his client needed access to traditional medicine with which he was treating hypertension and diabetes.

Ojo, in arguing the application, referred to a June 19 medical report issued by a Jalingo, Taraba State hospital, suggesting that the convict could die if not released from prison.

The judge said bail could not be granted to a convict as a matter of right but only under “exceptional circumstances,” which could include ill health.

Although Nyame cited health reasons for his request, Banjoko ruled that there was no credible evidence to warrant granting him bail.

TWITTER @thecableng
Copyright 2020 TheCable. All rights reserved. This material, and other digital content on this website, may not be reproduced, published, broadcast, rewritten or redistributed in whole or in part without prior express written permission from TheCable.
Tags
bailex-Taraba governorFederal High CourtfraudJolly Nyame
Advertisement