12:24 2019
Print This Article Share it With Friends
👤by Mayowa Tijani  0 Comments
Advertisement

Aliko Dangote, president of Dangote Group, says food producers in Nigeria are working with the government to hit a compliance level of 90 percent for food fortification by 2020.

Speaking at the second annual Nigeria Food Processing and Leadership Forum in Lagos on Monday, Dangote, who chaired the forum, said since the first meeting in July 2018, the food producers have reached about 75 percent compliance in food fortification.

“The target we have now given to ourselves is to reach about 90 percent before we meet again sometime next year,” Dangote said after the CEOs roundtable meeting at the forum.

The forum was attended by Osagie Enahire, minister of health; Niyi Adebayo, minister of trade and investment, and the heads of National Agency for Food & Drug Administration and Control (NAFDAC), the Standards Organization of Nigeria (SON), and the Federal Competition and Consumer Protection Commission (FCCPC).

According to data presented by TechnoServe, an international non-governmental organization, a number of companies have significantly improved their compliance with food fortification standards since commitments they made at last year’s forum.

These efforts are part of the Strengthening African Processors of Fortified Foods (SAPFF) project focused on increasing consumer access to adequately fortified foods, implemented by TechnoServe with support from the Bill & Melinda Gates Foundation. 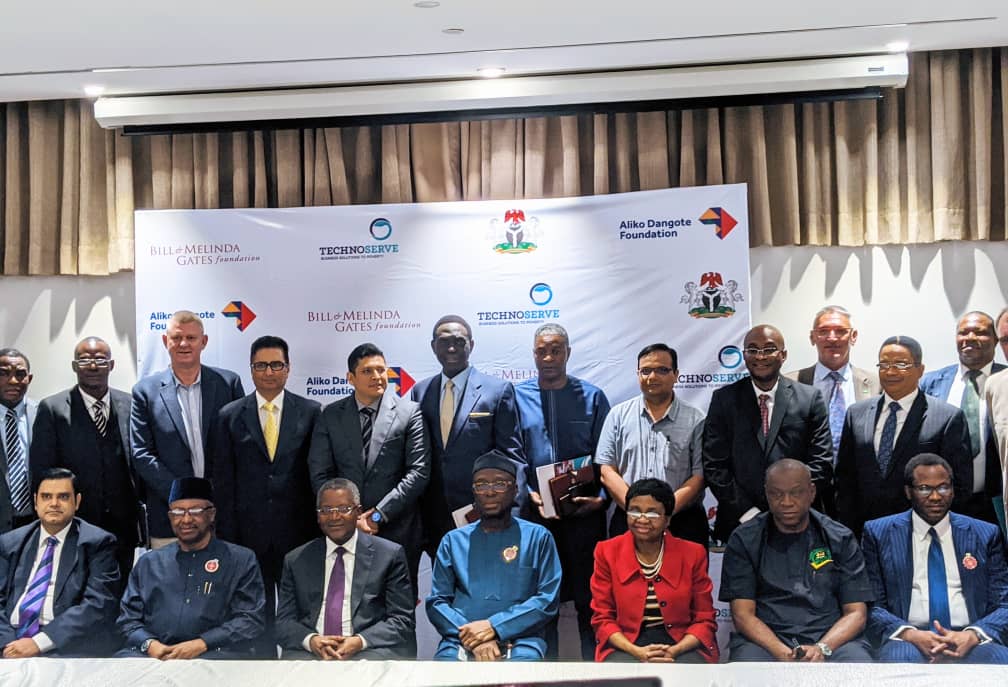 Speaking on fortification of the most consumed staple in Nigeria, rice, Dangote said Nigerians can be sure that most of the rice the would eat forthwith will be fortified.

“We don’t really want to see any more imported rice in Nigeria. But if we do, that rice will not be released by NAFDAC unless it is fortified. The major ones that we have not been able to capture are the small ones that are smuggled through the borders, which we hope will stop,” Dangote told TheCable

“Be rest assured that going forward, most of the rice that you’d eat will be fortified.”

He added that “by creating a common set of compliance standards, while also giving companies the tools they need to effectively fortify their foods, we are creating a sustainable path to delivering Nigerians food that will help them live healthier, more productive lives.”

To strengthen industry-wide compliance, TechnoServe says it has been working with a number of private sector partners to pilot Nigeria’s first-ever Micronutrient Fortification Index (MFI).

The MFI is a tool that effectively differentiates companies by the extent to which they meet industry benchmarks, including compliance with Nigerian Fortification Standards. Companies’ overall scores will be presented in a dashboard that will be updated annually to show progress and gaps—ultimately contributing to a robust industry-wide platform that emphasizes quality standards as a Key Performance Indicator (KPI).

“The next level of action for the Flour Milling Association of Nigeria is that we envisage industry-wide application of the MFI and we believe that this will happen. It will give us greater leverage and provide us with a platform to make a case for increased advocacy to the relevant authorities to ensure that all inputs that go into the practice of fortification meet the required standards,” Olalekan Saliu, executive secretary of the Flour Milling Association of Nigeria.

The forum also reviewed progress on the Joint Regulatory Framework (JRF), which coordinates the enforcement of industry activities by NAFDAC, SON, and FCCPC.

Following an inter-ministerial meeting in November, policy recommendations moving forward include advocating for increased national budgetary allocations towards nutrition and fortification, and establishing a collaborative border control mechanism that ensures edible oil imports are recorded and conform to Nigerian Standards.

“That’s why I’m inspired by the work that’s happening in Nigeria. By fortifying staple foods, the country is making sure that an entire generation of children survive and grow up to meet their full potential.”

Worldwide, more than 2 billion people suffer from micronutrient malnutrition—deficiencies in essential vitamins and minerals that are integral to healthy growth and development.

Fortifying staple foods— such as oil, flour, salt and sugar—with vitamins and minerals has been proven to be one of the most cost-effective and scalable tools to combat malnutrition and save lives.

One out of three Nigerian children under five are stunted—their bodies and brains deprived of the key nutrients they need to fully develop to reach their full potential. Over the long-term, stunting results in a 10 to 17 percent loss of wages. When multiplied across the nation, it’s estimated that Nigeria loses more than US$1.5 billion in GDP annually as a result of diminished productivity and increased healthcare costs.

“Nigeria will be the world’s third-largest country by 2050. If we don’t address it now, poor nutrition threatens to hinder our ability to prosper and play a leading role in the global economy,” said Larry Umunna, West Africa Regional Director, TechnoServe.