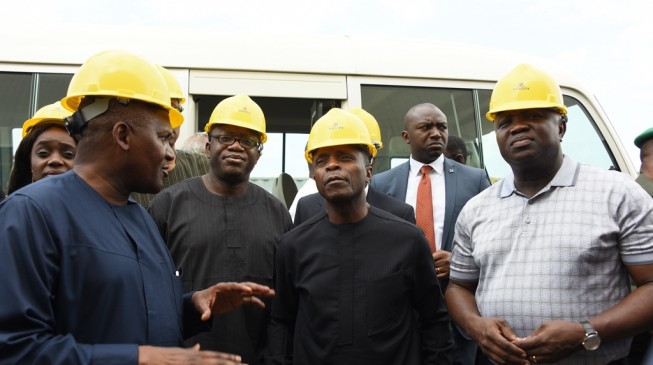 02:42 2016
Print This Article Share it With Friends
👤by Mayowa Tijani  5 Comments
Advertisement

Speaking during a visit to the Lekki free trade zone on Saturday, Ambode said the refinery, petrochemical, gas and fertilizer projects being undertaken by Aliko Dangote, Africa’s richest man would significantly boost the economy of Lagos and Nigeria in general.

Ambode said the refinery has a pipeline project that transfers crude from the Niger Delta to Lagos.

“There is pipeline transfer project that brings gas from Bonny down to Olokonla and down to Lekki and then the fourth one is the fertilizer project all in one location.”

“The coming of the Vice President to inspect this project is instructive and a sign post that the Federal Government is in support of what is going on.

“The truth is this, we might not be able to show you all that is going on here but in another few weeks, we will do an aerial view of this project and also do a documentary because for the very first time we are going to have a Petrochemical project that is coming on stream by December 2017.

He added that apart from the 135,000 direct jobs that will be created from the projects, another 100,000 indirect jobs would be generated while income accruable to the federal government would be in the region of over $500million in three years.

“It is important that we understand the depth of what has happened here and also use it as a platform to encourage other investors that Lagos is on the rise and the future of Lagos is very bright.

Osinbajo, who spoke to journalists at the free trade zone, said the project as a whole is an incredible industrial undertaken being the largest and the most ambitious in Africa.

“This is incredible if that can be done because it would be a major strategic asset for Nigeria, it would boost our power supply tremendously,” Osinbajo said.

Dangote, who is leading the change at the trade zone said the gas production project will bring uninterrupted power supply to Nigeria’s economic capital.

“Lagos is one state that is very investor friendly and the governor himself has always been asking what are the issues and he normally put in place steps to resolve those issues immediately.

“Our target is that in the next five years or so from now, we hope and we believe that half of Nigeria’s crude will be refined and exported rather than just exporting crude to go and create jobs elsewhere,” Dangote said.

TWITTER @thecableng
Copyright 2020 TheCable. All rights reserved. This material, and other digital content on this website, may not be reproduced, published, broadcast, rewritten or redistributed in whole or in part without prior express written permission from TheCable.
Tags
akinwunmi ambodealiko dangoteDangote refinerylagosLekkiYemi Osinbajo.
Advertisement