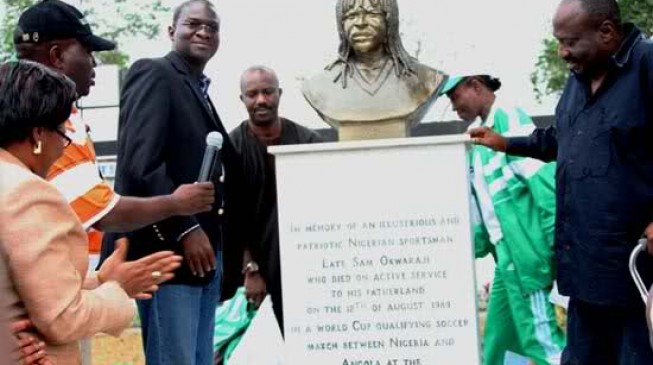 23:52 2019
Print This Article Share it With Friends
👤by Contributor  0 Comments
Advertisement

When I strolled into the National Stadium on 12 August 1989, I had many businesses in mind.

The National Stadium was being opened after being shut down for years in preparation for Nigeria’89, the FIFA age grade competition that Nigeria still did not host.

There was 1990 World Cup qualifier against Angola, in which my brother and friend Samuel Sochukwuma Okwaraji was playing in, I anticipated the role he would play in the game. I never knew that he would die in that match.

Two months earlier, he did not play a game in Ibadan, though he was in Nigeria. He told me that he was tied of proving himself repeatedly – team officials were still treating him as if he was not good enough for the Super Eagles. Sam travelled to Enugu to see his family.

I met Sam through Onochie Anibeze. Another friend Ben Edokpayi had written about a Nigerian in Europe who was asking for a chance (only a game) to prove to Nigerians that he had a play in the Super Eagles that was suffused with great players at various stages of their distinguished careers.

By August 12, he had become famous for his humility, education (he was a PhD student in law), amazing football skills, and his willingness to put his country first, always.

Sam debuted for Nigeria 30 January 1988 against Algeria, at the Nnamdi Azikwe Stadium, Enugu. It was an appropriate introduction. He grew up in Enugu and his family was still there.

He was amazing. Nigerians noticed. He had played at the 1988 Africa Cup of Nations where Nigeria finished second, scoring the competition’s fastest goal, a stunner against Cameroun that kept the Indomitable Lions in check among other contributions. He was in the 1988 Olympic team and his eyes were set on the World Cup in Italy, a country where he began his professional career in 1984-1985, in AS Roma. He played for NK Dynamo Zagreb (1985-1986)‎,‎ Austria Klagenfurt (1986-1987), VfB Stuttgart‎ (1987-1989), SSV Ulm (loan) (1987-1988).

We became closer after the fiasco in Seoul, where the Nigerian team, that had a 20-year-old history of harassing Brazil at the 1968 Olympics in Mexico, succumbed to Brazil’s 5-0 trouncing. In Mexico, Nigeria led Brazil 3-0 at half time, the game ended 3-3.

Sam was unhappy about Seoul and wrote letters to me on what could be done to gain a World Cup place. It was a personal ambition.

The Italians had wanted him to nationalise, or at least play in their League, he refused, telling them he would play for Nigeria. It would have been a delight to appear at the 1990 World Cup in Italy in Nigerian colours. He died driving that dream. He was just 25!

Sam was different. He prepared his contract which always featured a clause that he would be available for his country, without any cost to Nigeria. At this time, clubs and players asked for various sums to be paid to represent the country. Unlike others who stayed in hotels on arriving Lagos, he would stay with his relations in Festac Town.

It was on a visit to the Festac home that I discovered that his sister was two years ahead of me at IMT, Enugu. We became family and that made his death more shocking. We were to meet after the match.

There were no telephones and I was holding to his letter before his arrival that we would see. At the 77th minute, he collapsed, was stretchered out, ambulanced away. Most people in the stadium knew it was a serious injury. Nobody thought of death.

I dispatched Eyobong Ita to the Medical Centre. He did not return by the end of the game. I became more agitated, more over the fact that Eyobong could have forgotten that he had to write the story for the Sunday edition of the paper. It appeared that the major angle of the story would be Sam’s collapse.

Overall, it was a terrible day, apart from the slim victory that raised doubts about Nigeria’s hopes of a first World Cup qualification. Many were injured in the over-crowded stadium.

It was the first game at the National Stadium in more than two years and more people wanted to see the Eagles again than the stadium could take.

Match over, I made my way to the Medical Centre. A crowd was there, expecting a limping Sam issuing from the place. Some journalists were there. I found Eyobong and he had the news that an ambulance moved Sam.

Then I saw someone (I cannot disclose the source even after 27 years). Terrible day, I began a conversation. “Horrible day,” he said. “We lost six people, including Sam”. I had no reason to doubt him, I had no reason to take the story as he gave it. I remain eternally grateful to him.

In a quick meeting, I told my team what happened and the need for us to keep the story to ourselves.

We were the ones breaking the news to sources we expected to confirm it. We asked Philip O. C. Achebe, Secretary of the Nigeria Football Association, he did not know. I spoke to Alhaji Babayo Shehu, Director-General of the National Sports Commission, in his office, where he was making final plans for the National Sports Festival that was to start at the National Stadium the next day. He did not know. The Festival had been moved to Lagos because facilities in Bauchi, the proposed host, were not ready.

Our team of Onochie Anibeze, Eyobong, Philip Ahante and George Esiri (photographer) jammed inside a vehicle for the General Hospital, Marina, where we were told the ambulance headed. I was driving.

How would you believe that resurrection was impossible for a friend, brother?

I still hoped that my source was wrong. The next day I intended to make a round of apologies to all those I had misled with the news.

We went to the emergency ward first. Some victims of the over-crowded stands were receiving treatment. Sam was not there. I found courage to park on Broad Street, where the hospital’s mortuary was located. I asked the mortuary attendant my silliest question, when he confirmed that Sam was there, “Is he dead?”

The man was angry for good reason. “This no be mortuary? I tell you say person dey here you dey ask whether im don die?” I felt a strong wind, the Marina’s I guess (in my village, it would be attributed to Sam, as his genuine farewell to a friend) blow me into reality.

Everybody crammed into the car again. We headed to the office through Apapa, made a stop on the Apapa-Oshodi Expressway for Onochie to stop press, call Sam’s club in Belgium, and for Esiri to develop his pictures.

Ahante and I drove to Festac’77 (now Tulip), the team’s camp. One more confirmation would not do us any harm.

While clearing with the hotel’s gate security, we met Clement Temile. He was at the hotel to meet Sam, unaware that he was gone. We broke the news to him; he wept. Sam was to take Temile back to Belgium, where he would commence his professional career in Europe. We saw other Eagles heading to the nightclub, some said they did know Sam was gone.

Coach Paul Hamilton was in tears when we got to his room. Food, room service brought, was left in one corner – untouched. I did not say a word to him. I left, certain that Sam was dead.

Back in the office, a flurry of activities led us to the production of the Sunday paper that blazoned the headline – OKWARAJI DEAD. An autopsy report said he died of congestive heart failure; he had an enlarged heart and high blood pressure.

The day after the country mourned deeply for one of its own. The debate was whether the National Sports Festival should be postponed or cancelled. A decision was reached to go on with the Festival, a decision I believe Sam would have supported.

Alhaji Babayo Shehu, with a large entourage of State Directors of Sports, who were in Lagos for the Festival, arrived at our office on the night of 13 August, a Sunday.

We made the visit to Sam’s family in Festac. From apologies to explanations, we came off that meeting letting the family into the details, as they were available.

More meetings followed until his burial in his native Umudioka, in Nkwerre, on 2 September 1989, after a funeral mass by Dr. Gregory Ochiagha, the Catholic Bishop of Orlu.

Promises to honour him, cater for his family, scholarships and jobs for his relations, manifested only in his bust outside the National Stadium.

PS: As I was writing this piece, Gara Gombe Ahmed Shuaibu asked me whether the outstanding allowances and bonuses of Sam Okwaraji had been paid. I told him I did not know. My little confession, I have not been in touch with the family, that much, lately.

Isiguzo, former chairman of Vanguard editorial board, was the newspaper’s sports editor in 1989.