In defence of Mrs Alakija 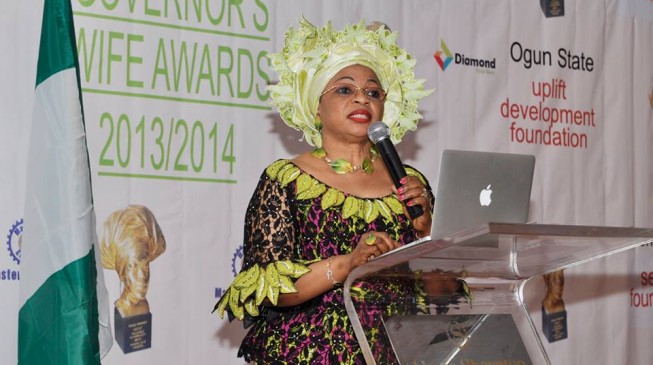 12:49 2018
Print This Article Share it With Friends
👤by Baba Grumpy  1 Comment
Advertisement

I do not know Mrs. Folorunso Alakija. I have never met her. Maybe I have been in the same room with her at public functions many years ago. Her life story is a good one. A story of how you can use your network to achieve huge life changing goals.

Mrs. Alakija’s life story is every bit as uplifting as that of Bill Gates, Sergey Brin and Mark Zuckerberg. People who basically turned (stole) other people’s ideas into billions.

Today, Mrs. Alakija is well known as Africa’s richest female. Compared to her status now, she had somewhat humble beginnings but her family was not the poverty ‘I don’t have shoes type’.

She comes from the Ogbara family and married into the Alakija family way before she was rich. Both families have name recognition in Lagos society. Without the oil block, Mrs. Alakija will still be a Nigerian socialite dominating the front pages of Dele Momodu’s society ragsheet.

When the grandparents of many who criticize and deride Mrs. Alakija today were riding bicycle to their farms, she went to PRIMARY SCHOOL IN THE UNITED KINGDOM. She then went to the modern day equivalent of a polytechnic in England to do her secretarial studies.

We are talking the 1960s here. Even today visiting Ghana is a big deal for many of her critics; talk less of going to school abroad.

In the 1970s she was an executive secretary in a number of big organizations. The Secretary and Personal Assistants (PA) of Ogas are gods everywhere and even more so in Nigeria. If you understand the concept of informal decision making units and you don’t appreciate the role of PAs, you need to read your textbooks again.

Mrs. Alakija would have fielded calls and met the ‘who is who’ of Nigeria in her Executive Secretary role.  She then left to form her own fashion business and eventually became the leader of Fashion Designers Association of Nigeria (FADAN).

FADAN was formed in 1989 when Nigeria’s own Emperor, Field Marshall Ibrahim Badamosi Babagida was the King and god of Nigeria. IBB empowered all sorts of trade associations. It was a bazaar.

Just form your own association and go and visit IBB to collect you share of the national Banofee pie. IBB was like a drunken sailor although Goodluck Jonathan defeats him hands down on the inebriated seaman stakes.

Unlike others who wanted money that finished after IBB left office, Mrs. Alakija was smart enough to ask for something more than money with the access she had. She asked for an oil block and the Minister of Petroleum exercising his constitutional rights awarded her the oil block. I understand she lost the original oil block that was awarded to her and would have lost out completely because of her spiteful brother who was once the leader of Nigeria but what she lost was replaced by something that was going to require massive financial outlay to bring to fruition. The people who gave her the replacement one didn’t expect her to make a success of it.

And, this is how ALL rich Nigerians made their money. EVERY SINGLE ONE OF THEM.

Get the minister to award you something – oil block, tax waiver, duty waiver, competition waiver, prosecution waiver, waiver from repaying your debts to bank, competition waiver / exclusivity. Or the special breeds and their children who actually stole money physically by driving trucks out of the Central Bank during the Abacha and Goodluck Jonathan years.

So why the hoopla over Mrs. Alakija’s fortunes? It is because:

2) She appears to be happily married. All the pretend feminists or orubebe feminists would like to be her, so they can postulate how women no longer need men but Mrs. Alakija is sticking with her husband and says endearing things like she still washes his briefs. Even if she is doing it with the washing machine, why is that your problem? It is her life and her values. Nobody has to help you push your ridiculous & disgruntled view of life if you don’t like Mrs. Alakija’s values.

3) She is a Christian or claims to be Christian. All the heathens are out for her on this one. Nobody must ascribe good fortune to God. They are quite happy to ascribe all bad things to God but heaven forbid someone says something good about God. Like the feminists, go and push your point elsewhere. Look for someone else to bash God for you. She ascribes her fortune to God. Deal with it.

4) We as a people also have a penchant for ‘beefing’ the rich. It is pure envy, jealousy or hatred depending on where you are on the ‘beefing’ spectrum.

I know nobody in Nigeria today who will pass on the opportunity given to Mrs. Alakija. Every single one of the people in Nigeria’s public office today has done one murky thing or the other. Worse than Mrs. Alakija did. They have murdered people to win elections and continue to do so but they are not the problem, it is a women who was smart enough to go where others have gone and is humble enough to ascribe her good fortune to powers beyond her ability that we lampoon.

Getting the minister of petroleum to award you an oil block in line with the law is not a crime, if you are really angry; take out a private prosecution against the award of her oil block.

If you are like me, wish her well and hope the Nigeria of the future can be one where everybody or most people have the opportunity to take advantage of life changing events in a transparent manner.

Don’t get me wrong, there are many in Nigeria who made decent money from their hard work. Historically we have had people like the Ekene Dili Chukwus and the Odutolas.

Our entertainers – musicians, actors and comedians have also done well for themselves, looking strictly at how they have achieved wealth using their talent. So it is possible to make it without stealing the common wealth. But you don’t see any of these hard working types criticizing Mrs. Alakija. They know talent and hard work is not enough.

Baba Grumpy works in financial services in the United Kingdom. He blogs mostly about football at http://babagrumpy.blogspot.co.uk. His Twitter handle is @BabaGrumpy