‘Displacing Buhari will be tough’, ‘Start from where we stopped’ — five things Obasanjo told Atiku 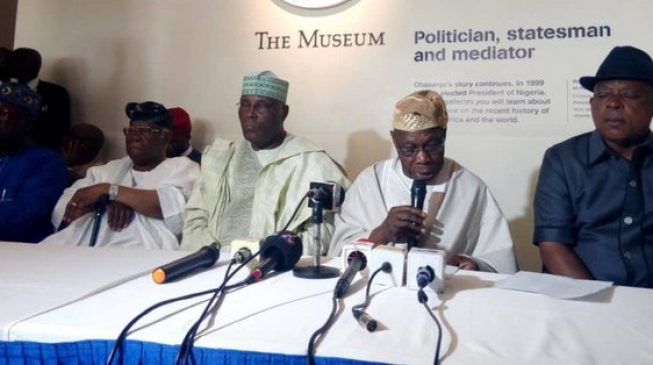 17:34 2018
Print This Article Share it With Friends
👤by Chinedu Asadu  0 Comments
Advertisement

One of the most interesting stories in the history of Nigerian politics played out on Thursday when former President Olusegun Obasanjo reconciled with Atiku Abubakar, his deputy while in power. Obasanjo and Atiku had fallen out during their second term in office and until Thursday afternoon, the two had been on warring paths while all the attempts to make peace fell like a pack of cards.

But the race to dislodge President Muhammadu Buhari seem to have ended their more than 15-year row as Obasanjo has endorsed Abubakar for president.

Abubakar led some prominent personalities to Obasanjo’s residence in Abeokuta, Ogun state, and during their meeting, Obasanjo told Abubakar that he had accepted his apology.

What were other key things he said during his meeting with the Peoples Democratic Party (PDP) presidential candidate?

ATIKU HAS CHANGED FOR GOOD

Obasanjo told his former deputy that having reviewed what went wrong in the past, he (Atiku) has “re-discovered and re-positioned” himself.

“Obviously, you have mended fences with the Party and fully reconciled with the Party. That’s why today, you are the Presidential Candidate of the Party. In addition to appreciating all that the Party has done for you, may I advise you to work together with all those who contested for the Party’s flag with you as a team for your campaign.”

DISPLACING BUHARI WILL BE TOUGH

Obasanjo, who has at various times said Buhari has failed Nigerians, also said among the other presidential aspirants in the PDP, Atiku is the best fit to displace the president during the 2019 polls.

The former president said: “For me, relatively and of all the aspirants in the PDP, you have the widest and greatest exposure, experience, outreach and possibly the best machinery and preparation for seeing the tough and likely dirty campaign ahead through.”

Obasanjo added that Atiku has what if takes to run a better government. According to him, the PDP presidential candidate has the “capacity to perform better than the incumbent.”

He said Abubakar “surely understand the economy better” and has “business experience, which can make your administration business-friendly and boost the economy and provide jobs.”

“You (Atiku) have better outreach nationally and internationally and that can translate to better management of foreign affairs. You are more accessible and less inflexible and more open to all parts of the country in many ways,” he added.

‘START FROM WHERE WE STOPPED’

He noted there have been gaps created between the time both of them left office in 2003 and now, and urged the presidential candidate to remember the “democratic” government they ran between 1999 and 2003. He also asked Atiku to always consider merit against blood relationship, against nepotism which some Nigerians have accused Buhari of.

He said: “When you become Nigerian President which, insha-Allah, you will be, remember what we did together in government – we ran an administration by Nigerians for all Nigerians where merit and performance count more than blood relationship, friendship or kith and kin.

“Although some time and ground have been lost, you should endeavour to start from where we stopped and recover some lost ground, if not time.”

OBASANJO HAD ONE DEMAND FROM ATIKU — RESPECT FOR RULE OF LAW

The ex-president also told his former deputy to always remember that the Nigerian constitution “must be scrupulously defended.”

“Please uphold truth, integrity, principles, morality and fight corruption, crimes and insurgency,” he requested of him.

“I make one demand and one demand on you today, I need you to say before God and man that you will always remain irrevocably committed to upholding all the provisions of the Constitution of the Federal Republic of Nigeria and the whole country will remain your single indivisible constituency.”

He didn’t end without taking a swipe at Buhari in that regard: “Constitutionalism, popular participation and inclusiveness are pre-conditions for reversing the deficits of the past three and half years,” he said, adding: “They will ensure abiding faith in our indivisibility, oneness and faith in the survival of all against none.”

TWITTER @thecableng
Copyright 2020 TheCable. All rights reserved. This material, and other digital content on this website, may not be reproduced, published, broadcast, rewritten or redistributed in whole or in part without prior express written permission from TheCable.
Tags
2019 electionsformer president Olusegun Obasanjoformer Vice-President Atiku AbubakarPresident Muhammadu Buhari
Advertisement