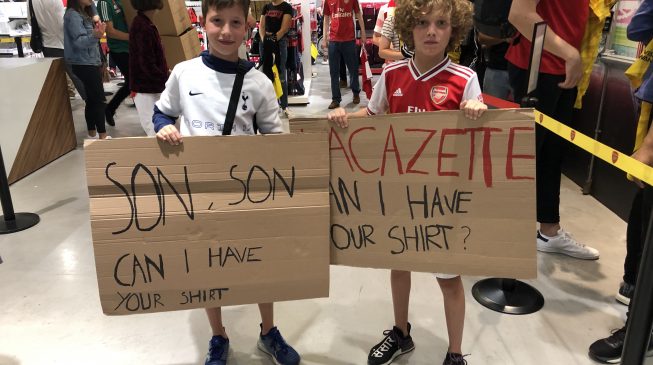 00:13 2019
Print This Article Share it With Friends
👤by Contributor  1 Comment
Advertisement

The North London Derby did not disappoint and it did live to its billing of being fierce, goals (yes we got the customary penalty), breathtaking  football and the atmosphere was great. Everything I had indicated in my preview of the game which you can read here (link to the earlier article) except for Ozil not playing a part were spot on.

Arsenal started the game turbo charged and you could see from the onset dictating the pace and took the game to Tottenham in the first 9 minutes. However, against the run of play, a counter attacking move by Erik Lamela whose shot on goal was deflected by Bernd Leno into the path of on-rushing Christian Eriksen, broke the deadlock. The Emirates was stunned and the Tottenham supporters who were tucked at the away end section close to the Clock end, could not believe their luck.

A Xhaka mistimed tackle in the box gave the away side a penalty and who else to score than Harry Kane from the spot. At this point, the Arsenal supporters were in total disbelief. This was not in the script.

At 0-2 down the Arsenal players could not believe it, their shoulders dropped, the body language did not look right however I noticed 20 year old Mattéo Guendouzi urging his team mates to get on with the game and a gesture of chin-up to another. Lacazette was at the center circle getting ready to restart the game that all hope was not lost. It was no surprise that those were pivotal to Arsenal turning the game around.

Unai Emery was bold to start with PAL  – Pepe-Aubameyang-Lacazette but immediately I had seen the line-up without Ozil or Ceballos (both creative midfielders), the big question was, where are the passes going to come from?

Lacazette doggedness and individual brilliance was needed to give Arsenal a life line just before the break. The hunger, anger and passion with which he took the shot from a tight angle and the eventual celebration at the clock-end was the tonic needed for a comeback.I have seen and also read how some have stated that the fans at Emirates do not get behind the team. On Sunday, the fans became the 12th player. At 0-2 down and in shock, they found their voices back and became the catalyst for Arsenal recovery.

Dani Ceballos introduction was a pivotal moment in the game. In hindsight, one could question why Unai Emery did not start him. His quick feet and ability to read the game almost produced an equaliser but for the brilliance of Hugo Lloris. The love from the fans were obvious as they sang  Oh Dani Ceballos (a song that had once been reserved for one of the fans favourite, Santi Cazorla).

Arsenal kept on pressing for an equaliser.  Mattéo Guendouzi decided to take the game by the scruff of the neck and with an Ozil-like pass found Aubameyang who instinctively buried the ball in the net before Lloris could react. The Emirates erupted! With 20 odd minutes to go, the Arsenal faithfuls smelt blood.

Sokratis Papastathopoulos did get a 3rd goal but was rightly ruled off. The result could have gone either way in the last 10 minutes as one could see the element of fatigue setting in. Alas, it ended in a 2-2 draw.Having gone through the match day emotions, one thing is certain, Unai Emery is yet to decide on his starting XI and which tactical formation to adopt. This was further buttressed going by his notes in the match-day  program, where he stated,  “When it comes to our formation, we have plenty of options. We are more rich tactically with different formations and tactics, and can change in each match and each moment in the 90minutes.”

The issue of an Arsenal identity or style of playing is what the fans are craving for under Emery. When you watch both Manchester City and Liverpool, their style of play is obvious straight away.

Mesut Ozil returned to the bench for the derby, confirming that he was now fit and available. I am sure watching from the bench, the mercurial playmaker would have wished to be on the field of play and lead the Arsenal orchestra. A telegraphic pass to Aubameyang, a no-look pass to Lacazette or a cross-field pass to Pepe would have been in the offering. Whatever the issue Emery has with him, this needs to be resolved and promptly too. Ozil has qualities that no one else in the current Arsenal team has at the moment. Omitting him deprives the team of those qualities. In my opinion, his creativity would have won Arsenal the match on Sunday. The trio of  Pepe-Aubameyang-Lacazette will only thrive with Ozil pulling the strings in the midfield.

Mattéo Guenduozi my word! The young lad was simply brilliant!! At 0-2 down, his gesture to his team mates to chin up and urging the Arsenal fans to get behind the team was an iconic moment for me. It brought back memories of Patrick Vieira urging the team on whenever Arsenal was down. His call up to the French National Team (Les Blues) by Didier Deschamp is an icing on the cake. I hope he continues his development and grow to be an Arsenal great. The ingredients are certainly there for greatness.

Adekoya (He is on Twitter @Bimboh5 ) is an ardent  Football lover and has been supporting Arsenal for over thirty years.