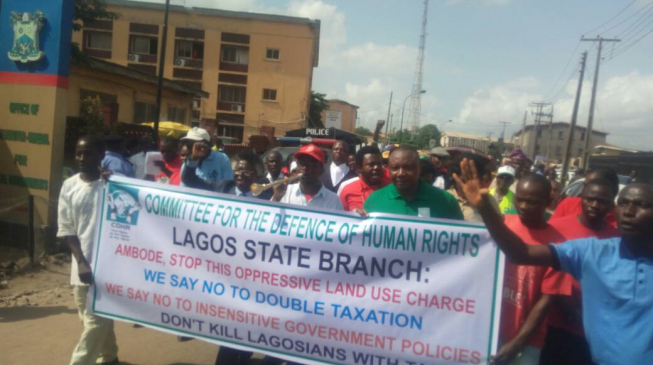 21:17 2018
Print This Article Share it With Friends
👤by Femi Owolabi  0 Comments
Advertisement

The Department of State Services (DSS) on Monday visited the secretariat of the Nigerian Bar Association (NBA) in Ikeja, Lagos, over the controversies surrounding the land use charge introduced by the government.

The association had given the government a five-day ultimatum to cancel the law. When the Akinwunmi Ambode government refused to accede to its request, the lawyers hit the streets.

Few days after the demonstration, the government announced a 50 percent reduction in the new rates but the NBA rejected it, insisting that the law should be cancelled.

There were reports that the DSS invaded the NBA secretariat over the action of the lawyers but Adesina Ogunlana,  chairman of the association, told TheCable that there was no invasion.

He confirmed that a DSS official was at the office of the NBA in Ikeja over the land use law.

Ogunlana added that the official demanded to be a part of the NBA meeting but that her wish was not granted.

“Before our meeting today, one official from the DSS came and said they heard we were going to have an emergency meeting on the reaction of the Lagos state government, following our protest against the increment in land use charge,”Ogunlana told TheCable.

“They said they wanted to know what I have to say at the meeting, and I asked, what do they want to know, and why must DSS be part of our meeting? I didn’t allow the DSS official attend our meeting because she is not a member of our branch.

“She then left peacefully, and I was surprised to later hear that DSS invaded NBA, Ikeja branch.”

The new land use charge wanted a property solely occupied by the owner for a residential purpose to be charged at a rate of 0.076 percent per annum.

TWITTER @thecableng
Copyright 2020 TheCable. All rights reserved. This material, and other digital content on this website, may not be reproduced, published, broadcast, rewritten or redistributed in whole or in part without prior express written permission from TheCable.
Tags
Lagos land use chargeLagos State GovernmentNigerian Bar Association Ikeja Branch
Advertisement