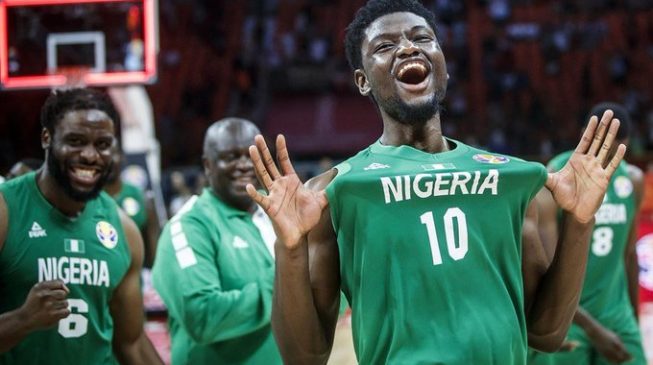 23:55 2019
Print This Article Share it With Friends
👤by Remi Sulola  0 Comments
Advertisement

D’Tigers became the first team to secure a ticket to the 2020 Tokyo Olympic Games after defeating China 86-73 points in the last classification game of the 2019 FIBA men’s World Cup.

The team took the initiative in the second quarter from China who won the first quarter, 21-19 points as they asserted their authority to end the first half, 35-31 points.

Playing against China who were also desperate for an automatic ticket from Asia, the players came to the party to clinch the 3rd and 4th quarters, 25-20, 26-22 on the day that 4 players recorded double figures.

Josh Okogie who shot 16 points, 3 assists and 5 rebounds to help his team to a win was unanimously voted as the man of the match while Nnamdi Vincent scored 14 points, 2 assists and 1 rebound.

Ekpe Udoh and Chimezie Metu scored 13 and 11 points respectively as the D’Tigers recorded the highest number of wins (3) in a single World Cup.

Alex Nwora, the head coach, described the win as a sweet victory which was enough to compensate the team for missing out of a place in the quarter finals.

Dare Sunday, minister of youth and sports, immediately after the win in a phone conversation with the team congratulated them for the win which has elevated the status of Nigerian sports globally.

D’Tigers. Minutes after the basketball game against the Chinese team I was on the telephone to congratulate the players and coaching team and convey the congratulatory message of Mr President to them for qualifying to fly Nigeria’s flag at the 2020 Tokyo Olympics pic.twitter.com/tEZQP4651o

Musa Kida, NBBF president said the Olympics ticket and the boys performance was a testament to hardwork of the board and the technical crew.

TWITTER @thecableng
Copyright 2020 TheCable. All rights reserved. This material, and other digital content on this website, may not be reproduced, published, broadcast, rewritten or redistributed in whole or in part without prior express written permission from TheCable.
Tags
D'TigersNBBFSportSunday DareTokyo 2020
Advertisement