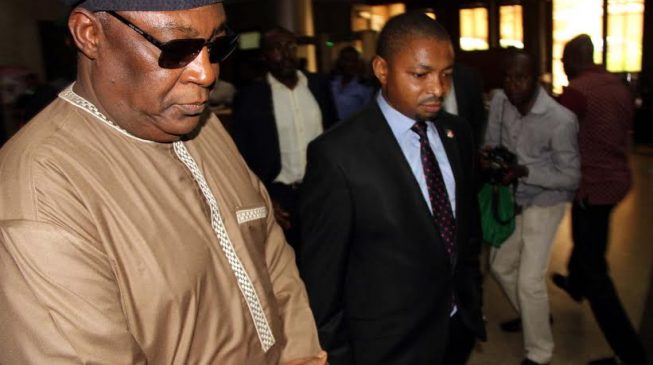 08:28 2019
Print This Article Share it With Friends
👤by News Agency  1 Comment
Advertisement

The Economic and Financial Crimes Commission (EFCC) has handed over a 13 bedroom, one-story building, forfeited by the late Alex Badeh, former chief of defence staff, to the management of the North-East Development Commission (NEDC).

On July 18, the EFCC had handed over one of the properties seized from the deceased to the Voice of Nigeria (VON).

The anti-graft agency also explained why it has the power to dispose of the assets retrieved from the ex-CDS.

The properties are parts of the assets seized from the late defence chief, who was being prosecuted by the anti-graft agency for charges bordering on criminal breach of trust, abuse of office and money laundering to the tune of N3.9 billion.

Tony Orilade, EFCC spokesman, in a statement, said the building, located at No 6, Ogun River street, Maitama, Abuja, was handed over to NEDC management by Muhammed Umar, EFCC’s director of operations, who represented Ibrahim Magu, acting chairman of the commission.

In his remarks, Magu congratulated the management of NEDC for getting the “beautiful structure” and urged them to maximize the usage for their benefit and that of the country.

“I wish to congratulate the management and staff of the NEDC on taking the ownership of this beautiful edifice,” Magu was quoted to have said.

“I equally want to implore the commission to put the property into maximum use for the benefit of the staff of the Commission and the country at large.”

Magu was also quoted as saying that the anti-graft agency is “unwaveringly” committed to living up to its constitutional mandate of riding the country of corruption.

TWITTER @thecableng
Copyright 2020 TheCable. All rights reserved. This material, and other digital content on this website, may not be reproduced, published, broadcast, rewritten or redistributed in whole or in part without prior express written permission from TheCable.
Tags
alex badehEFCCforfeited propertyIbrahim MaguNEDC
Advertisement