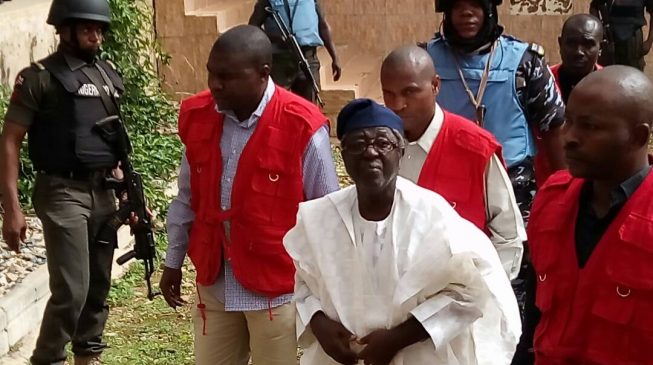 21:20 2018
Print This Article Share it With Friends
👤by Taiwo Adebulu  0 Comments
Advertisement

Jang is standing trial along with Yusuf Pam, a former government official in the state, on a 12-count charge bothering on diversion of public funds while serving as the governor.

At the court on Thursday, the Economic and Financial Crimes Commission (EFCC) presented its fourth witness, Habila Dung, a retired permanent secretary in the cabinet and special services department, office to the state government.

Led in evidence by Rotimi Jacobs, counsel to EFCC, Dung said his responsibility was to generate memos for payment, taking minutes of meetings, among other administrative duties which are assigned to him.

Dung said he generated memos approved by the former governor for the payment of over N4 billion for the state security council (SSC) between January and May 2015.

“The memos for the money, which were approved by Jang, then governor, were then directed to the commissioner of finance for payment,” Dung said.

“The funds are then released to Pam, the cashier, after the accountant general of the state credited the account of the cabinet special services account domiciled with Zenith Bank PLC.

“I witnessed Pam taking cash to the governor at the government house on several occasions.

“The SSC is saddled with the task of compiling monthly intelligence report and circulating the reports to the president, the defence headquarters, security chiefs and other states of the federation.”

Jacobs then tendered in evidence, the various memos and electronic payment documents of the transaction done on several days.

Mike Ozekhome, Jang’s lawyer, did not raise any objection to the admissibility of the documents.

Daniel Longji, the presiding judge, admitted in evidence the memos for the classified expenditure.

TWITTER @thecableng
Copyright 2020 TheCable. All rights reserved. This material, and other digital content on this website, may not be reproduced, published, broadcast, rewritten or redistributed in whole or in part without prior express written permission from TheCable.
Tags
EFCCHabila Dungjonah jangmike OzekhomeN6.3bn fraudPlateauRotimi Jacobs
Advertisement