Ekiti gets N4.7bn, Abia N5.7bn as another tranche of Paris Club loan refund is released 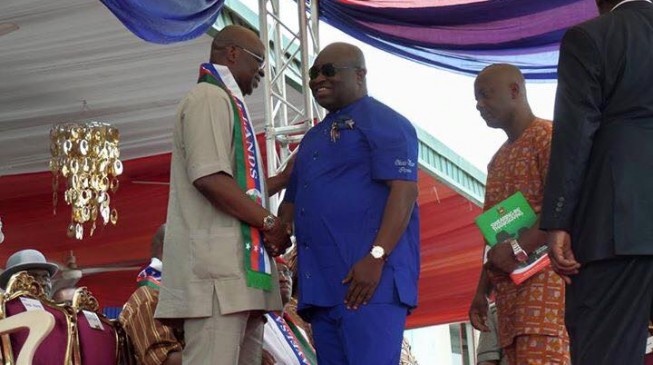 13:17 2017
Print This Article Share it With Friends
👤by Chinedu Asadu  2 Comments
Advertisement

The ministry of finance has released another tranche of Paris Club loan refund to two states.

Although the ministry is yet to release full details regarding the funds, it was learnt that Ekiti state got N4.772 billion while Abia got N5.715 billion.

The refund is as a result of over-deductions from statutory financial allocations to the 36 states between 1995 and 2005 for debt servicing.

Lere Olayinka, spokesman of Ayodele Fayose, Ekiti state governor, confirmed the state’s receipt of the money in a statement.

The statement said the amount would be shared between the state and the local governments.

Obinna Oriaku, Abia state commisioner for finance, also confirmed that his state had received the money, but said Abia got lower than the “N11 billion to N12 billion” it was expecting.

Oriaku added that despite the “shortfall”, Okezie Ikpeazu, the governor, had directed that the released funds should be committed wholly to salary arrears.

While Ekiti got N9.5 billion in the first tranche of funds, Abia had received N11.4 billion.

The first tranche of N388bn was released to the states months ago, but there were allegations that the governors diverted the money.

“The funds were released to state governments as part of the wider efforts to stimulate the economy and were specifically designed to support states in meeting salary and other obligations, thereby alleviating the challenges faced by workers,” Salisu Dambatta, ministry of finance spokesman, had said in a statement during the release.

Nigerian governors had said they will offset a backlog of salaries and allowances owed their workers as soon as the second tranche of funds is released.

TWITTER @thecableng
Copyright 2019 TheCable. All rights reserved. This material, and other digital content on this website, may not be reproduced, published, broadcast, rewritten or redistributed in whole or in part without prior express written permission from TheCable.
Tags
abia stateEkiti StateParis Club loan refund
Advertisement