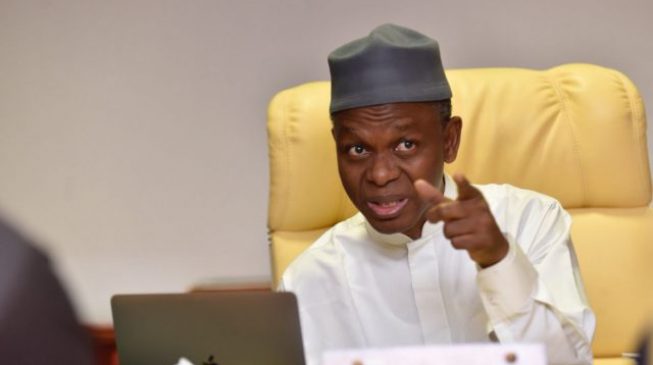 14:20 2019
Print This Article Share it With Friends
👤by Oluwatoyin Bayagbon  0 Comments
Advertisement

Nasir el-Rufai, governor of Kaduna state, says any “foreign power” that intervenes in the general election would return to to their country in body bags.

Speaking during an NTA Live programme on Tuesday evening, el-Rufai said as an independent and sovereign state, Nigeria would never bow to foreign powers.

“We also know that at their own stages of development, they went through these challenges. So please, let’s work together, let’s advice one another– but don’t lecture us.

Recalling a period when Nigeria had intervened in Sierra Leone and Liberia’s political affairs in the 1990s, he said the interference was as a result of a consensus by the international community and it was also a “gesture of neighbourliness”.

He said foreign countries have been through “though phases” before developing into world powers, adding that Nigeria is trying to run itself as decently as possible.”

The governor’s comments come after Garba Shehu, presidential spokesman, said the federal government will not tolerate any foreign interference in the nation’s affairs.

Shehu said that in reaction to criticisms by US, UK and EU following the suspension of Walter Onnoghen, former chief justice of Nigeria (CJN) by President Muhammadu Buhari.

The Anglo-American duo had also threatened to place travel restrictions on those who incite violence or interfere in proceedings during the elections.

*[VIDEO] If you interfer in #Nigeria's #Election, we will kill you and send you back in BODY BAGS – #Kaduna Gov. El-Rufai warns International Community* pic.twitter.com/MY3TcckMCg

TWITTER @thecableng
Copyright 2020 TheCable. All rights reserved. This material, and other digital content on this website, may not be reproduced, published, broadcast, rewritten or redistributed in whole or in part without prior express written permission from TheCable.
Tags
2019 electionsGarba ShehuNasir el-RufaiPresident Muhammadu BuhariUK visa banUS visa banvisa ban
Advertisement