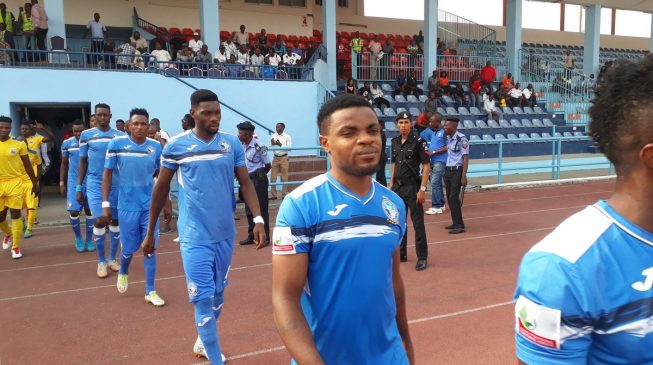 09:00 2018
Print This Article Share it With Friends
👤by Remi Sulola  0 Comments
Advertisement

A total of six games took place in the Nigeria Professional Football League (NPFL) on Wednesday.

FC Ifeanyi Ubah were given a reality check by visiting Akwa United as they drew 1-1 in Nnewi.

Cyril Olisema had given the Promise Keepers the lead before Ikeokwu Patrick equalised for the Anambra Warriors. The result takes Akwa to the top of the log with 13 points while FC Ifeanyi Ubah now have 7 points.

Yobe Desert Stars continued their impressive run at home with a 1-0 defeat of Katsina United thanks to a second half strike from in-form Chinedu Ohanachom.

Kano Pillars proved too strong for Plateau who had no response to a brace from Junior Lokosa. The Peace Boys now have 12 points and are in second place while Pillars are up to third on 11 points.

Enyimba continued their climb up the table with a convincing 1-0 win over Abia Warriors courtesy of a well crafted free kick by Stanley Dimgba.

MFM recorded their third win of the season as they beat Wikki Tourists 2-1.  The goals came from Adebayo Waheed and Jesse Akila.

At the Cathedral, Enugu Rangers have a tough battle with Rivers United, while Go Round host Nasarawa United. Kwara Stadium Complex is the place to be as Kwara United lock horns with Lobi Stars.

TWITTER @thecableng
Copyright 2020 TheCable. All rights reserved. This material, and other digital content on this website, may not be reproduced, published, broadcast, rewritten or redistributed in whole or in part without prior express written permission from TheCable.
Tags
Akwa UnitedFC Ifeanyi UbahLMCLobi StarsNPFLSportWilki touristYobe Dessert Stars
Advertisement

EXCLUSIVE: Why US is mulling visa ban on Nigeria, by diplomatic sources