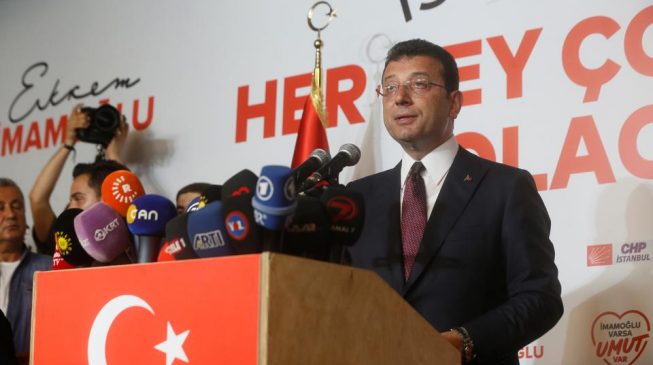 13:30 2019
Print This Article Share it With Friends
👤by Jamilah Nasir  0 Comments
Advertisement

Ekrem Imamoglu of the opposition Republican Peoples Party (CHP) has emerged the mayor of Istanbul, a major city in Turkey.

The result is described as a big loss for President Recep Erdogan, leader of the AK party, who had said, “whoever wins Istanbul, wins Turkey”.

Imamoglu had polled 48.8 percent of the votes in March to win the poll by a slight margin as against Binali Yildirim, AK candidate, who got 48.55 percent votes.

Yildrin, however, alleged electoral malpractices. The supreme electoral council consequently annulled the election and called for a re-run less than two weeks after Imamoglu took office.

Yidrin has, however, accepted defeat following the new results and congratulated his rival.

“According to the result as of now, my competitor Ekrem Imamoglu is leading the race. I congratulate him and wish him good luck,” Yildirim said.

Delivering his victory speech, Imamoglu, 49, said: “You protected the reputation of Turkish democracy in front of the whole world. You protected our tradition of democracy, one that has existed for more than a hundred years.

“We are opening up a new page in Istanbul. On this new page, there will be justice, equality, love.”

Yildrin was formerly the mayor of Beylikdüzü, a western district of Istanbul, between 2014 and 2019.

TWITTER @thecableng
Copyright 2020 TheCable. All rights reserved. This material, and other digital content on this website, may not be reproduced, published, broadcast, rewritten or redistributed in whole or in part without prior express written permission from TheCable.
Tags
AKPIstanbulRecep ErdoganTurkey
Advertisement