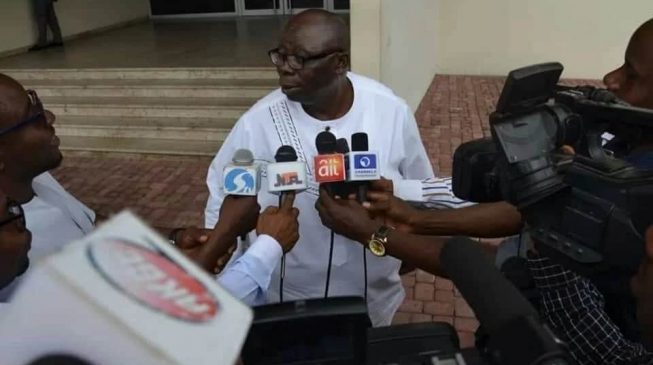 11:41 2018
Print This Article Share it With Friends
👤by Ebunoluwa Olafusi  0 Comments
Advertisement

Chris Ekpenyong, a former deputy governor of Akwa Ibom state, has threatened to release “damning records of secret deals” by Godswill Akpabio, a former governor of the state.

Ekpenyong, who was removed from office in 2005, said this while warning Akpabio to stop attacking him.

Akpabio was alleged to have said Ekpenyong deceived him into defecting from the Peoples Democratic Party (PDP) to the All Progressives Congress (APC).

But the former deputy governor described the allegation as “baseless and childish”.

He said the ex-governor was blackmailing him because PDP stakeholders in Akwa Ibom have endorsed him as consensus candidate to lock horns with Akpabio in the 2019 election in Akwa Ibom north-west senatorial district.

“It sounds childish that someone of that level should make this kind of baseless allegation simply because I am challenging him for the mandate we willingly gave to him in 2015, which he threw away because of selfish interest,” he reportedly told some of his supporters during the weekend.

“Assuming someone gave that kind of advice and agreed, it means someone can ask him to go and jump into the river and he would obey? If he continues to attack me, I will unleash his records of secret deals.

“I am happy that generally, people know Akpabio to be an uncommon liar; he cannot continue to fool everybody all the times with his lies. I want to implore all of you to go back to your various local governments to begin your campaign for effective change in our zones.”

But Anietie Ekpong, Akpabio’s media aide, dismissed the allegation while describing it as a rumour that could have emanated from anywhere.

TWITTER @thecableng
Copyright 2020 TheCable. All rights reserved. This material, and other digital content on this website, may not be reproduced, published, broadcast, rewritten or redistributed in whole or in part without prior express written permission from TheCable.
Tags
Akwa IbomChris EkpenyongGodswill Akpabio
Advertisement