Ex-NIMASA DG shows up in court in crutch 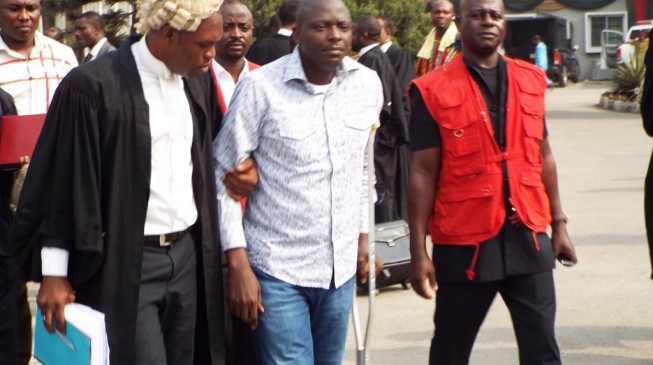 15:18 2016
Print This Article Share it With Friends
👤by Taiwo George  0 Comments
Advertisement

In a manner similar to that of Mohammed Bello, former national chairman of the Peoples Democratic Party (PDP), who was wheeled into the federal high court in Abuja, Patrick Akpobolokemi, ex-director-general of the Nigerian Maritime Administration and Safety Agency (NIMASA), on Thursday walked into the premises of the federal high court in Lagos with the aid of a walking stick.

Akpobolokemi, who was arraigned by the Economic and Financial Crimes Commission (EFCC), over alleged fraudulent land contract of the Nigerian Maritime University, has been in custody of the anti-graft agency since December.

His arrest created a scene, as operatives of the commission bundled him into a waiting bus after he refused to follow them voluntarily.

However, peaking after his appearance in court on Thursday, Nwabikwe Joseph, his counsel, expressed optimism that Akpobolokemi would not spend the night in detention.

“I am satisfied with the process in court today. My client will go home, but according to EFFC, he will go home through EFCC; that’s what they said. He has to get to EFCC, then from EFCC he will probably go home.”

The EFCC has filed different charges against Akpobolokemi. he told journalists.

The EFCC has filed different charges against Akpobolokemi.

TWITTER @thecableng
Copyright 2020 TheCable. All rights reserved. This material, and other digital content on this website, may not be reproduced, published, broadcast, rewritten or redistributed in whole or in part without prior express written permission from TheCable.
Tags
EFCCMohammed BelloNIMASAPatrick AkpobolokemiPDP
Advertisement