EXCLUSIVE: No Nations Cup but no regrets choosing Nigeria over England, says Iwobi 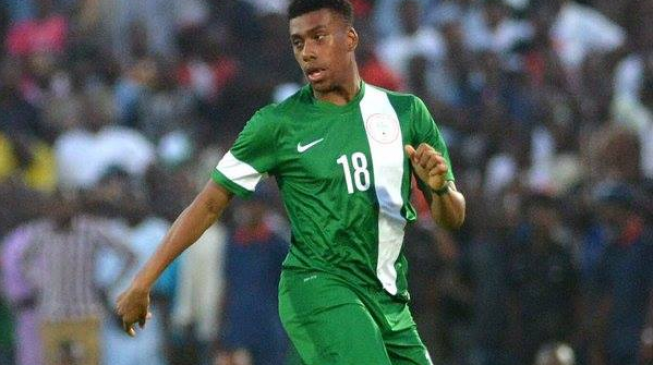 16:16 2016
Print This Article Share it With Friends
👤by Remi Sulola  0 Comments
Advertisement

Arsenal football club of England and Super Eagles of Nigeria star, Alex Iwobi, is certain that he will have no cause to regret choosing Nigeria over England, despite the failure of the team to qualify for the 2017 African Cup of Nations (AFCON).

Iwobi, the cousin of soccer legend, Austin ‘Jay Jay’ Okocha opened up completely to TheCable on his career, challenges, aspirations and all that has to do with his amazing rising profile in football at his tender age.

Congratulations! So far, things are moving so quickly in your career. How do you feel about this?

I am pleased with the progress I have made this season.

I was first spotted by an Arsenal scout called Mr Shaun O’Connor when I was six years old. I was playing for a team called Rippleway under coach Steven McKenzie. I formally signed for Arsenal when I was eight years.

Life itself is full of upsets and challenges and this is the case in the life of a footballer. I became a regular for the Arsenal reserves last year and this year I was formally promoted to the first team. It has happened so fast and I am still struggling to believe this.

Arsenal football club has an abundance of talent – Ozil, Carzola, Sanchez, Welbeck, Arteta, Mertesacker, Walcott, Chamberlain, Cech to name but a few. I have learnt a lot from these senior players and I am honoured to have been accepted into their fold.

The Barcelona game in the UEFA Champions League was a huge test for you. You competed against the likes of Lionel Messi and Neymar, did you feel nervous before the game?

It was a great experience playing at the Nou Camp in front of a capacity crowd and sharing the pitch with the very best players in the world like Neymar, Suarez and of course Messi. It was a dream come true and the culmination of all the effort I have put in over the years at Arsenal. Messi, as a player, is unstoppable.

I was excited and not nervous and couldn’t wait to get out on the pitch. The thunderous ovation from both the Barcelona and Arsenal fans made me realise the importance of the occasion and what it meant to them. I am glad that although the result went against us, I gave a good account of myself.

For someone so young, you have seriously improved and matured. How did this happen?
Humility is key to the development of any player. I have total respect for the manager, my team mates and opponents. One should always be magnanimous in victory and gracious in defeat. A person should never get carried away by success, as this is easiest way to fail.

I am a confident person as I have always believed in my own ability. In life what you put in is what you get back. You have to be disciplined and prepared to make sacrifices to get to the top. Having said that, I am far from the finished article. My game is work in progress. I have to remain dedicated, focused and committed to improving my game. 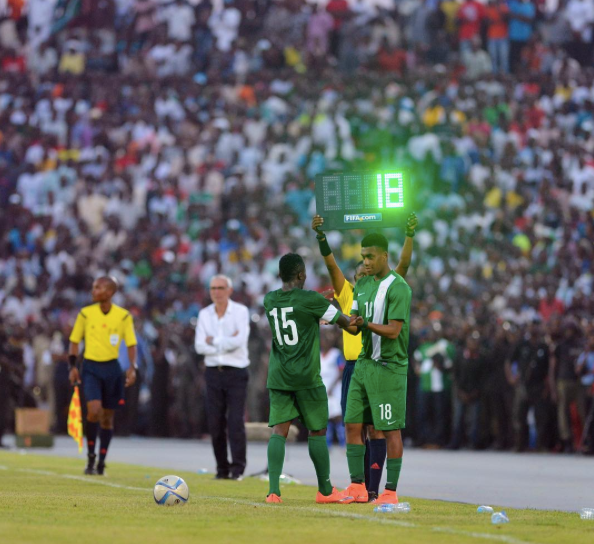 Iwobi being introduced to the pitch in Nigeria’s last AFCON qualification match against Egypt.

When was the first time ever in your life that you realised, yes, you were immensely gifted by God to be a great player?
I am far from being a great player now; I am gradually finding my feet in football. I have always loved football and started following my dad to the park to watch him play as soon as I could walk. My idol then was Alan Shearer, as I admired his goal scoring abilities.

I have always wanted to be a footballer. I was once asked what I would be if I wasn’t a footballer and I couldn’t think of anything else. It’s an amazing feeling being paid to do what you enjoy most and to bring smiles to the faces of the fans. What a wonderful feeling! What better job is out there? I seriously can’t think of any.

What can you say about Arsene Wenger?

Arsene is a very experienced coach with a lot to offer. His record speaks for itself. He has brought a certain brand of football to the club and Arsenal’s playing style – which encompasses pace, technique, constant movement – is the envy of many clubs.

Arsene has a reputation for trusting young players and I have benefited immensely by this approach. I will continue to work hard to justify the trust he has put in me. Unknown to me, Arsene took an interest in me at a young age and I was delighted when he first invited me to train with the first team.

What about your education? What plans do you have, with your busy schedule right now?

I have four B-Tech Papers (which are equivalent to A-Levels). I intend to do a correspondence course at some point in my career to prepare myself for life outside football.

Choosing Nigeria as opposed to the England national team, do you think you can ever regret that decision? And what part did your dad play in this decision of yours?

I am Nigerian by birth and was born in Lagos, on the 3rd of May 1996. I left for the United Kingdom with my parents when I was four months and have lived in the UK ever since.

When I was first invited by the Nigeria Football Association, I had a discussion with my dad and he told me to follow my heart. I also sought the opinion of my uncle Jay Jay Okocha who shared his personal experiences with me.

There are a lot of misconceptions about how football is run in Nigeria, but I decided to see for myself. My message to all footballers and indeed all sportsmen who live abroad and who have the opportunity to represent Nigeria is ‘come and see for yourself’.

It has been a joy to play for Nigeria, the fans, the players, staff and press have been so welcoming. It was an emotional and unbelievable moment for me and my parents donning the ‘ Green White Green’ colours of Nigeria in friendly matches against the Democratic Republic of Congo and Cameroon in Belgium in October last year.

Nigerians are passionate about football and I would love to be part of a team that will help the country take its rightful place in Africa and World football. My decision has been made and I am looking forward to hopefully representing Nigeria in the years to come.

I would like to express my profound gratitude to the England Football Association for the privilege and honour of having 11 caps for England at Under 16, 17, and Under 18 levels.

How disappointed are you that you won’t be going to the African Cup of Nations. Some people said things would have been different had you started the game against Egypt; what do you think?

Sadly, Nigeria will not be involved in the 2017 Africa Nations Cup. However, I will never regret my decision to play for Nigeria. I would like to urge the fans to stand behind the Nigeria Football Federation(NFF) and the coaching staff and players in the quest to return to the big league.

I respect the decision of Coach Siasia to bring me on in the second half against Egypt; it is not for me to question his decision as he was, without a doubt, doing what he thought was in the best interest of the team. My job is to give my best whenever I am on the pitch. I have a lot of respect for Coach Siasia and I have learnt a lot in the time I have worked with him.

I am hoping to make a contribution towards Nigeria in qualifying for the World Cup and if invited, I look forward to playing a part in the forthcoming Olympics at Rio, Brazil.

Jay Jay Okocha keeps singing your praise. What can you say about him?

I am in touch constantly with my uncle Jay Jay Okocha and the best advice he has given to me over the years is to be my own person and to express myself while playing football. He says that I should be confident and to work hard to improve on certain aspects of my game. He is my role model and I am working hard to be as good as him.

I do not feel any pressure whatsoever stepping out of the shadow of Jay Jay Okocha. He is a legend both in Nigeria and abroad and has his own unique style of playing football which is a joy to watch.

I am however my own person and I do my best to express myself during matches. I am glad that people are beginning to recognise me as a player in my own right and not only as the nephew of the great Jay Jay Okocha.

I’m sure your EPL goals against Everton and Watford will remain indelible in your memory?

Scoring my first senior goal for Arsenal in a competitive game against Everton was a magical moment. Sadly, my mum, dad and sister couldn’t come to watch the game.

However, they watched me score at the Emirates the following week against Watford. It was an amazing feeling in both games hearing the Arsenal fans chant my name.

Banks to increase CBN deposit as MPC raises CRR to 27.5%