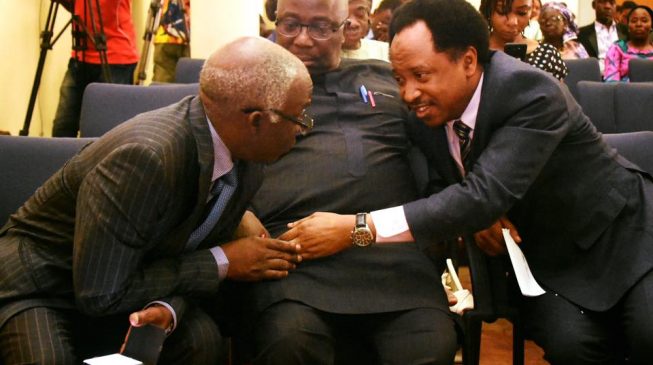 15:47 2018
Print This Article Share it With Friends
👤by TheCable  0 Comments
Advertisement

The senior advocate of Nigeria (SAN) said Sani’s disclosure validates a statement made to the effect by Itse Sagay, chairman, presidential advisory committee against corruption (PACAC).

He commended the senator representing Kaduna central for “blowing the whistle on a matter of crucial national importance”.

Falana called on the presidency to ensure that the revenue mobilisation, allocation and fiscal commission takes action on the matter.

“For the first time since May 1999, the Senator disclosed the jumbo emoluments of the members of the upper chamber of of the national assembly of the Federal Republic of Nigeria. According to the Senator, the running cost of each Senator is N13.1 million in addition to a consolidated salary of N750,000 per month,” he said in a statement released on Sunday.

“Apart from the monthly package of N13.8 million each Senator is given the opportunity to execute constituency projects to the tune of N200 million per annum. However, the disclosure made by Senator Sani does not cover the allowances for cars, housing, wardrobe, furniture etc running to several millions of naira approved for each Senator.

“While we commend Senator Shehu Sani for exposing the secrecy which had enveloped the salaries and allowances of federal legislators in Nigeria before now, it is crystal clear that the statement credited to Professor Itse Sagay, the chairman of the Presidential Advisory Council not too long ago to the effect that Nigerian legislators are the highest paid in the world cannot be faulted.

“However, the federal legislators cannot be blamed alone for paying themselves skyrocketing salaries and allowances outside the ambit of the wages approved for all political office holders in the country.

“The revelations by Senator Sani should therefore provide an opportunity for the Nigerian people to review the entire costs of governance under the rickety democratic dispensation. The Buhari administration owes the nation a duty to ensure that no political officer is paid salaries and allowances that have not been approved by the Revenue Mobilization. Allocation Fiscal Commission. The federal government should, as a matter of urgency, halt the payment of double salary and allowances to a number of legislators and ministers.”

Falana said Sani must not be punished by the red chamber for “spilling the beans on the payment of the illegal salaries and allowances to federal legislators”.

He called on “all lovers of democracy and public accountability in Nigeria” to rally round the senator “by ensuring that he is not harassed”.

TWITTER @thecableng
Copyright 2019 TheCable. All rights reserved. This material, and other digital content on this website, may not be reproduced, published, broadcast, rewritten or redistributed in whole or in part without prior express written permission from TheCable.
Tags
Itse Sagay
Advertisement