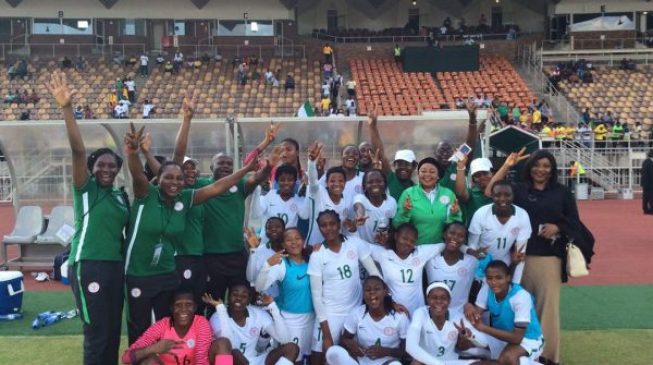 17:11 2018
Print This Article Share it With Friends
👤by Remi Sulola  0 Comments
Advertisement

Nigeria’s U20 female team have secured a 2-0 victory over their South African counterparts.

The game was the first-leg encounter of the final qualifying round of the FIFA U20 Women’s World Cup.

Rasheedat Ajibade put the Falconets ahead with a sublime finish on the half-hour mark.

The Falconets proved too strong in the midfield and were untroubled by South Africa’s Basetsana.

With 10 minutes to the end of the first half, Nasarawa Amazons forward, Anam Imo, scored the second goal for the Falconets.

Imo again came close to scoring in the second half but her effort hit the crossbar.

The Falconets have taken a huge step in their quest to qualify for their ninth U20 Women’s World Cup.

The return leg will be played January 27 at the Samuel Ogbemudia Stadium, Edo state.

The U20 World Cup will take place in France from August 7 to 26.

TWITTER @thecableng
Copyright 2020 TheCable. All rights reserved. This material, and other digital content on this website, may not be reproduced, published, broadcast, rewritten or redistributed in whole or in part without prior express written permission from TheCable.
Tags
Anam ImoBasetwanaChristopher DanjumaFalconetsFrance 2018nigeriaRasheedat AjibadeSouth AfricaSport
Advertisement