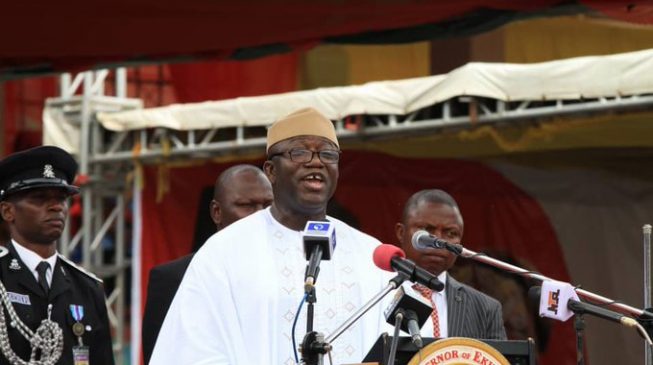 17:20 2019
Print This Article Share it With Friends
👤by Ebunoluwa Olafusi  0 Comments
Advertisement

Kayode Fayemi, chairman of the Nigeria Governors’ Forum, says doing away with security votes will breed chaos in the country.

Fayemi, who is the governor of Ekiti state, said this at the quarterly policy dialogue on accountability for security votes which held at the auditorium of the Independent Corrupt Practices and Other Related Offences Commission (ICPC) in Abuja.

The event was organised by the Anti-Corruption Academy of Nigeria (ACAN).

Citing the constitution, Fayemi dismissed arguments that security votes were illegal and added that they have been in existence since the colonial era.

He said security votes are necessary and abolishing it will bring down development, increase insecurity and also slow down the various states’ response to emergencies.

“Governments all over the world have security votes but they may not call it the same name as ours because, for obvious reasons, government business may not necessarily be all in the public glare,” he said.

He said in his state, every transaction involving security votes are well documented.

The governor added that the abuse of security votes in the country would continue to be rife unless something is done to ameliorate it.

Fayemi also said the creation of state police, which he prescribed as the antidote to the expenditure being incurred by governors, would reduce the complaints about insecurity.

He also advocated a partnership between the NGF and the ACAN to work out modalities that would lift the issue of security votes and its accounting processes to meet global best practices.

TWITTER @thecableng
Copyright 2020 TheCable. All rights reserved. This material, and other digital content on this website, may not be reproduced, published, broadcast, rewritten or redistributed in whole or in part without prior express written permission from TheCable.
Tags
ACANkayode fayemiSecurity votes
Advertisement