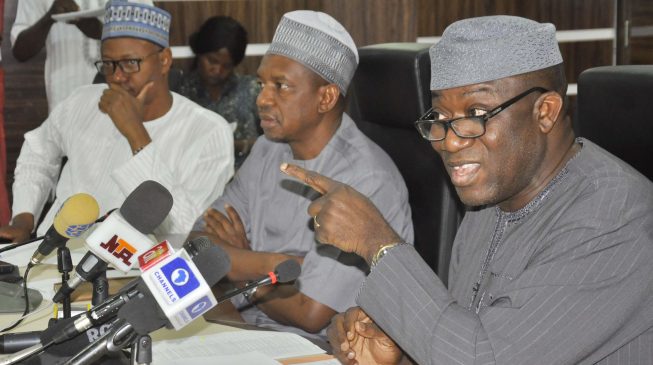 18:48 2018
Print This Article Share it With Friends
👤by Chinedu Asadu  1 Comment
Advertisement

The federal government says it will no longer spend a dime on Ajaokuta steel plant located in Kogi state.

Kayode Fayemi, minister of mines and steel development, said this at a press conference in Abuja on Thursday.

He said the government will go ahead with plans to concession the company, a move the house of representatives had opposed.

Yakubu Dogara, speaker of the house, had said the lawmakers would resist the concession which he described as a “waste” of the $5.1 billion said to have gone into the plant.

But Fayemi insisted that there is no going back on the concession.

Fayemi said in its 2017 budget, the ministry indicated ‘concessioning of Ajaokuta plant’ and the national assembly approved it at N2 billion.

“So, I find it surprising when I hear what Dogara said that concession is no longer allowed. All that we have done is to commence the process of implementing what they passed in the law,” he said.

“We have agreed Nigeria will not spend one dollar on the so-called completion. We have spent close to $8 billion since 1979 when this started.”

Fayemi added that the ministry had commenced the technical audit of the steel plant after which it will roll out plans for the concession.

He said since 2015, there has been at least 14 companies that have indicated interest in taking over the plant but “we told them we would not undergo the process without a technical audit and transaction advisory service.

“We will only give the steel plant to people who participate in an open bid that is transparent and independently verifiable. And this will only happen after the technical audit that is ongoing.”

On the vote of no confidence recently passed on him by the lawmakers, the minister said: “We have honoured all their invitations except the sectoral debate and we gave them reasons why we could not come.

TWITTER @thecableng
Copyright 2020 TheCable. All rights reserved. This material, and other digital content on this website, may not be reproduced, published, broadcast, rewritten or redistributed in whole or in part without prior express written permission from TheCable.
Tags
Ajaokuta Steel Companyhouse of representativeskayode fayemi
Advertisement