FG to compensate codeine manufacturers with N1bn for seized products 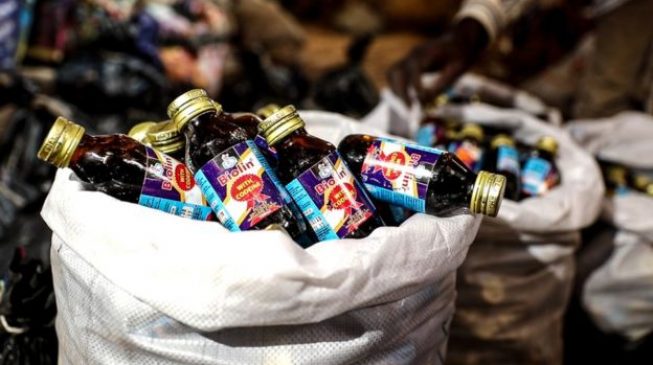 09:40 2019
Print This Article Share it With Friends
👤by News Agency  0 Comments
Advertisement

The federal government says it will spend over N1 billion to compensate manufacturers of codeine-containing cough syrup who had their products seized or withdrawn from circulation.

Moji Adeyeye, director-general, National Agency for Food and Drug Administration and Control (NAFDAC), disclosed this on Monday in Lagos.

The government had in May 2017 banned the production and importation of codeine and tramadol in the country following a BBC documentary exposing the abuse of codeine-based cough syrup.

Some companies were also shut down for illegal production and distribution of the products but were later reopened.

According to Adeyeye, over two million bottles of codeine were seized from companies across the country in a bid to curb the use of the syrup by youth to get high.

She explained that some companies where the products were recalled from were producing legally and not guilty of any wrongdoing, hence the move by the government to reimburse them.

“It is about a year ago when the documentary about codeine was made which led to the Ministry of Health banning the product,” Adeyeye said.

“Since that time, we have been having a series of meeting with many government agencies and committees such as National Security Adviser group, the Presidency and the Ministry of Health.

“The final point is that we recalled about 2.5 million bottles of codeine and then put them on hold. This is sad because some companies did not commit the crime.

“So we put all the codeine on hold including the powder that they are using to the syrup. It will cost about N1 billion plus to reimburse these manufacturers.

“We are working on whatever the Ministry of Health is doing now to reimburse those companies affected. We just called a meeting about the last two weeks on it.

“The amount that is tied to the companies and they will be reimbursed because most of them legally produce the product in spite of the bad distribution channels.

“In tackling fake and substandard products, we do raids and many a time, our staffs don’t sleep, they keep vigil, mainly to intercept those drugs in concert with the Nigerian Customs Service.

“We are also working with the local manufacturers to make sure that their products attain the international standard.”

Meanwhile, the house of representatives has proposed a fine of N2 million and a two-year jail term for organisations that will go against the ban on tramadol and codeine in the country.

According to the proposal, individual offenders will be liable to N500,000 fine and two years imprisonment or both on conviction.

TWITTER @thecableng
Copyright 2020 TheCable. All rights reserved. This material, and other digital content on this website, may not be reproduced, published, broadcast, rewritten or redistributed in whole or in part without prior express written permission from TheCable.
Tags
codeinecompensationFGnafdac
Advertisement