Nigeria will do everything possible to make Jammeh hand over, says Onyema 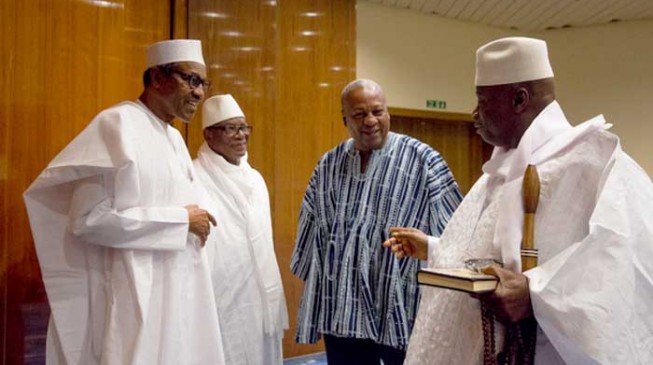 17:47 2017
Print This Article Share it With Friends
👤by News Agency  0 Comments
Advertisement

Geoffrey Onyeama, foreign affairs minister, says Nigeria will do everything possible to bring about a peaceful resolution of Gambia’s political crisis.

Expressing optimism that President Yahya Jammeh would listen to the voice of his people, Onyeama told NAN about the efforts being made to resolve the political impasse in the West African country.

The Gambian leader had accused ECOWAS of declaring war against his country, when he was asked to step down for a democratically-elected president.

Jammeh accused ECOWAS of putting forces on alert in case he refused to step down, and vowed to stay in power.

In a New Year speech broadcast on state TV, Jammeh promised to defend Gambia against any outside aggression.

The Gambian president initially conceded the election, but he changed his mind days later, raising fears that regional powers might have to intervene to oust him.

Onyeama said in spite of the Gambian leader’s stands, Jammeh would honour the call of the ECOWAS leaders to bow out of office at the end of his mandate on January 19.

“We will like to believe that he will listen to the voice of his peers in the sub region ECOWAS,” he said.

“And that he will also listen to the voice of his people but above all he will follow the democratic path. So, we will do everything possible to bring that about.

“Essentially, we want a peaceful resolution to the issue; you know we have experienced conflict in our country and we know how far back in development conflict can take a country to.

“So we will do everything possible to help Gambia have a peaceful resolution to this political crisis.”

President Muhammadu Buhari, who is heading a mediation committee on the Gambia’s political impasse, had led other West African leaders to meet with Jammeh and Adama Barrow, winner of the election, on the issue.

Other leaders in the ECOWAS delegation were Presidents Ellen Johnson-Sirleaf of Liberia, Ernest Koroma of Sierra Leone, and John Mahama of Ghana.

The leaders appealed to Jammeh to leave office and also reportedly sought a “honourable exit” for him.

The exit would ensure that he is not tried for various human rights crimes he is alleged to have committed while in office.

However, in spite of the visit, Jammeh remained defiant.

TWITTER @thecableng
Copyright 2020 TheCable. All rights reserved. This material, and other digital content on this website, may not be reproduced, published, broadcast, rewritten or redistributed in whole or in part without prior express written permission from TheCable.
Tags
Adama BarrowecowasGeoffrey OnyeamaYahaya Jammeh
Advertisement