Fifa Rankings: Nigeria goes into Afcon as 3rd in Africa — 45th on the globe 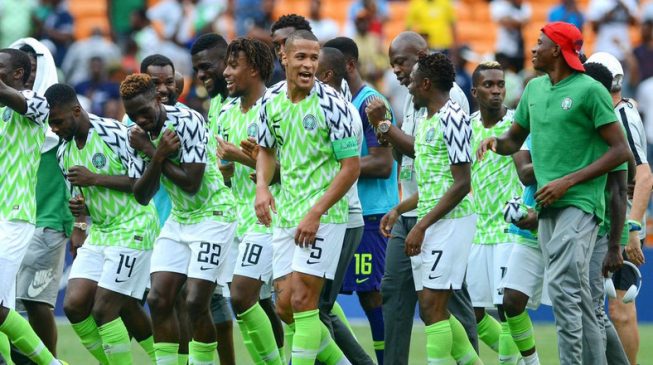 20:32 2019
Print This Article Share it With Friends
👤by Remi Sulola  0 Comments
Advertisement

According to the rankings released on Friday by the world footballing body, the Super Eagles maintain its 3rd position on the continent.

The Eagles on Saturday took on Zimbabwe in a pre-Afcon tune up game which ended in a 0-0 draw at the Stephen Keshi stadium in Asaba, Delta state.

Terenga Lions of Senegal that the Super Eagles will take on in their second pre-Afcon friendly match on Sunday maintain its number one spot in the Continent and 22nd in the world.

Nigeria’s opponents at the Afcon in Egypt Guinea, Burundi and Madagascar are 71st, 108th and 134th in the world respectively.

Afcon host nation Egypt are 58th in the world, 8th in the continent.

Nigeria will open their Nations Cup campaign on June 22 at the Alexandria stadium against Burundi.

Belgium also maintained its number one spot in the world with 1746 points followed by World Cup winners, France with 1718 points:

TWITTER @thecableng
Copyright 2020 TheCable. All rights reserved. This material, and other digital content on this website, may not be reproduced, published, broadcast, rewritten or redistributed in whole or in part without prior express written permission from TheCable.
Tags
2019 AFCONegyptEgypt 2019FIFA rankingsSenegalSportSuper EaglesTunisia
Advertisement

I left Watford for China because of money, says Ighalo