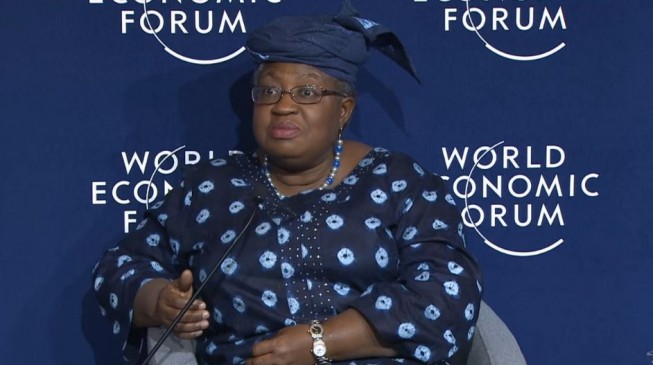 11:48 2017
Print This Article Share it With Friends
👤by Mayowa Tijani  0 Comments
Advertisement

In her intervention for the World Economic Forum, Okonjo-Iweala argued that “the first step to Africa’s prosperity – saving children’s lives”.

She said for every $1 spent on vaccinating children, the world stands to gain as much as $44.

For Africa, the road to prosperity must begin with investment in its most precious resource. Not its minerals, oil reserves or plantations, but something even more critical to Africa’s future: the health of its children. I don’t mean this figuratively; an investment in children’s health is precisely that. Compelling evidence now suggests that every dollar, shilling, pound or rand spent on preventing disease does not just reduce needless human suffering, but it also makes sound economic sense too.

With more than 30 vaccine doses administered worldwide every second, immunization is already recognized as one of the most cost effective health interventions. But recent research published in the journal Health Affairs, now puts a more precise figure on it. For every dollar invested in childhood immunization we can expect to save $16 in healthcare costs, lost wages and productivity due to illness. If you take into account the full value placed on people living longer, healthier lives, then that return on investment increases even further to $44.

For governments, this represents a huge opportunity. But it also means that when it comes to child health the buck shouldn’t stop with health ministers; protection of child health needs to be a national priority for all government, and all governments. Yet, even though vaccination is such good value, one-in-five children globally are still not getting access to even the most basic shots, with many countries having immunization coverage rates of below 50%, the vast majority in my home continent of Africa. Because of this 1.5 million children still die every year from vaccine preventable diseases.

Part of the problem is failure by leaders to recognize vaccines as a top priority investment. In particular, finance ministers too often fail to recognize that vaccines aren’t just good value for money, but are investments with very high returns. In addition to this there is a widespread assumption within governments and beyond, that childhood mortality is just a matter for health ministers. In reality, it has implications for just about every aspect of government.

That’s because preventing illness through immunization can have a huge impact in helping to contribute to the social and economic wellbeing of individuals, families, communities and countries. A healthy infant does not need medical treatment or care, both of which come at a cost. She also has a greater chance of growing into a healthier child, who is able to attend school and ultimately become a more productive member of society. And instead of caring for a sick child, her parents are in a better position to go out to work and increase their own ability to earn, which means they will have a greater disposable income to feed back into the economy.

All of this is not just good for boosting local and national prosperity; strong routine immunization programmes also form a vital part of robust universal healthcare systems, which are themselves critical to helping national leaders achieve economic and development targets. To put a figure on it, this latest study, which looked at 94 low- and middle-income countries, predicts that between 2011-2020 childhood immunization stands to offer up to $1.43 trillion in economic benefits.

However, if we wish to harness these benefits, as well as further economic returns beyond 2020, then we need to see greater long-term domestic commitment towards immunization. Since 1990 we have seen childhood mortality more than halve, and since 2000 we have witnessed more than 580 million additional children receive vaccines, thanks to organisations like UNICEF, the World Health Organization and Gavi, the Vaccine Alliance, of which I am the Board Chair. But if this kind of progress is to be sustained then we need to see strong immunization policy backed up by long-term health spending allocation.

That means the focus needs to shift away from just health ministers, and instead engage all aspects of government, in particular finance ministers. As former Finance Minister for Nigeria, Africa’s largest economy, I know how important it is for health ministers to make a better case for immunization to finance ministers when it comes to defending their health budget. They need to make finance ministers understand the critical role that reducing infectious disease has in boosting the economy, and the role they have to play in making that happen.

To some extent we have already seen some very positive signs of progress, not least with the former President of Tanzania, Jakaya Kikwete, last year agreeing to become Gavi’s Global Ambassador for Immunisation to help spread the word to his peers about the benefits and value of vaccination that he saw in his own country. In addition, we have seen increases in spending on health. Over the next five years we expect to see the 39 poorest African governments contribute around $6 billion towards the cost of immunization. If childhood mortality is to continue to fall we will need to ensure that in the years to come that figure continues to rise.

TWITTER @thecableng
Copyright 2020 TheCable. All rights reserved. This material, and other digital content on this website, may not be reproduced, published, broadcast, rewritten or redistributed in whole or in part without prior express written permission from TheCable.
Tags
ngozi okonjo-iweala
Advertisement