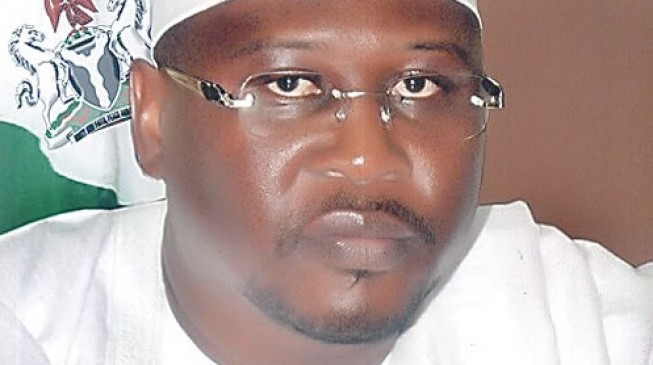 20:11 2014
Print This Article Share it With Friends
👤by Taiwo George  0 Comments
Advertisement

Barely 24 hours after a court judgment vacated Ahmadu Fintiri as acting governor of Adamawa state, the former speaker has “returned to his position” at the state house of assembly.

Fintri was absent at the special sitting of the house held earlier in the day, as well as at the state party secretariat where Bala Ngilari, the newly-sworn-in governor held a reconciliation meeting.

Ngilari was the deputy of Murtala Nyako, who was impeached on July 5.

But in a statement issued by Solomon Kumangar, his chief press secretary, Fintri announced his return to his legislative functions, thanking the people for their support since he succeeded Nyako.

He said he would continue contributing his quota towards the development of the state. He also said he was driven by passion, not greed, as insinuated in some quarters.

“Ahmadu Umaru Fintiri, who has since resumed office as the speaker of the Adamawa state house of assembly expresses gratitude to all state legislators, members of the national assembly, the Peoples Democratic Party, the opposition and the overwhelming majority of the people, who not only shared his vision and zeal of rescuing and emancipating Adamawa state from the shackles of bad governance but rallied together with him to banish tyranny, tribalism and primordial sentiment from Adamawa state,” the statement read.

“He pledges his life to the struggle to lift Adamawa state out of the morass in which it has found itself and that the whole issue is not about Fintiri but about Adamawa state.

“He said anyone who takes the democratic revolution that has taken place as personal is being selfish and does not love Adamawa state.”

Fintri said he would not give up the appeal of the court judgment that led to his exit from office, expressing optimism that the case would end in his favour.

TWITTER @thecableng
Copyright 2020 TheCable. All rights reserved. This material, and other digital content on this website, may not be reproduced, published, broadcast, rewritten or redistributed in whole or in part without prior express written permission from TheCable.
Tags
Adamawa StateAhmadu FintiriHouse of AssemblyMurtala Nyako
Advertisement