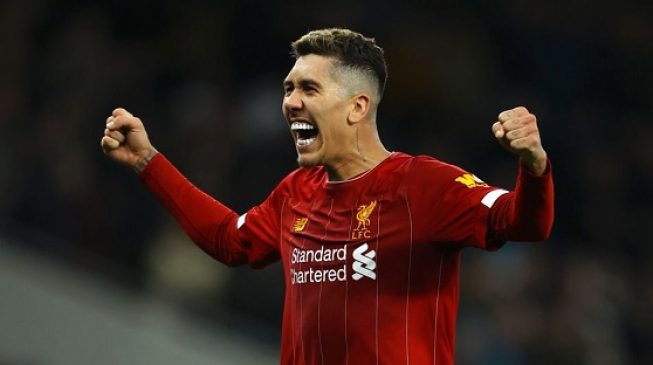 21:30 2020
Print This Article Share it With Friends
👤by Jonathan Ledger  0 Comments
Advertisement

Liverpool earned a hard-fought 1-0 win at Tottenham, thanks to a Roberto Firmino strike to, reach a club record 38 games unbeaten.

The unbeaten run conjured by Jurgen Klopp’s men surpasses the previous 37 games record set in 1894 — some 125 years ago.

The Reds unbeaten season of 20 wins in 21 games is their best ever start to a season, and is also the best ever by any club in Europe’s elite leagues.

Liverpool’s 12th straight win, coupled with Leicester’s loss sees the Reds open a 16-point gap at the summit of the EPL table, and continue to march towards the possibility of a first league title in 30 years.

Firmino, Brazilian forward, helped Liverpool reap the reward of a dominant first half when his precise left-footed strike found the back of net for what turned out to be the winning goal.

Tottenham had the Merseyside club on the ropes in the second period but Giovanni Lo Celso and Heung-Min Son both wasted glit-edged openings.

The loss means the North London side have lost consecutive matches for the first time since coach, Jose Mourinho’s arrival.

Manchester United, the only team to take points of Liverpool this season, and Chelsea both secured straightforward wins on the afternoon.

Marcus Rashford, on his 200th club appearance, scored a brace before further goals from Anthony Martial and Greenwood sealed a 4-0 win.

Fourth-placed Chelsea, on the other hand, needed a penalty from Jorginho, Tammy Abraham’s header and Callum Hodson-Odoi’s strike to claim a 3-0 win and maintain a five-point gap over Man United who occupy fifth position on the log.

TWITTER @thecableng
Copyright 2020 TheCable. All rights reserved. This material, and other digital content on this website, may not be reproduced, published, broadcast, rewritten or redistributed in whole or in part without prior express written permission from TheCable.
Tags
EPL resultsLiverpoolTottenham
Advertisement