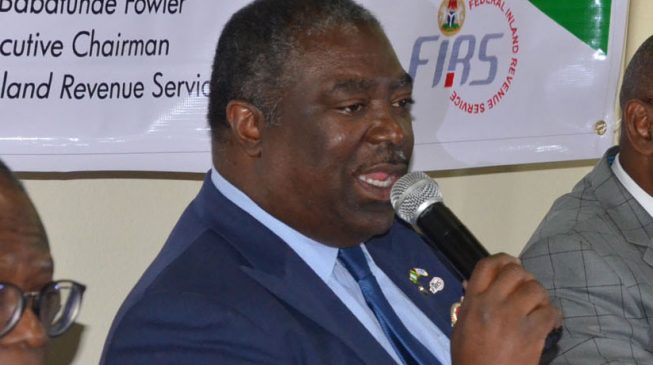 17:59 2019
Print This Article Share it With Friends
👤by Oluwatoyin Bayagbon  0 Comments
Advertisement

The Federal Inland Revenue Service (FIRS) says it  generated N1.5 trillion as revenue in the first quarter (Q1) of 2019.

Babatunde Fowler, FIRS chairman disclosed this to NAN on the sidelines of a high-level meeting on illicit financial flows hosted by the United Nations General Assembly in New York, US, at the weekend.

The revenue represents a 28% increase from the N1.17 trillion reported by the service in Q1 2018.

According to him, the Q1 figure represents 18.7%  of the agency’s total revenue target of N8 trillion for 2019.

He said the amount included revenue from non-oil taxes that were 11% higher than what the agency realised from that sector in Q1 of 2018.

“In the first quarter (of 2019), what I will say is that in the non-oil sector, we generated 11 percent higher than what we generated in 2018. Basically, we have generated about N1.5 trillion,” he said.

Fowler said the target, described by economy watchers as quite ambitious, was realistic with the cooperation of tax payers, among other factors.

“It is quite realistic as long as we have the cooperation of tax payers in addition to deployment of technology,” he said.

“We have already started the enforcement of over 50,000 accounts that have banking turnover of 100 billion and above that have not filed their returns.”

The FIRS chairman also spoke of plans by the agency to surpass the over one trillion naira it realised from valued added tax (VAT) in 2018.

In  2018, the service broke an all-time revenue generation record, raking in N5.3 trillion during the whole year.

TWITTER @thecableng
Copyright 2019 TheCable. All rights reserved. This material, and other digital content on this website, may not be reproduced, published, broadcast, rewritten or redistributed in whole or in part without prior express written permission from TheCable.
Tags
Babatunde Fowlerfederal inland revenue service (FIRS)vat
Advertisement