FIRS: No plan to increase VAT to 50 percent 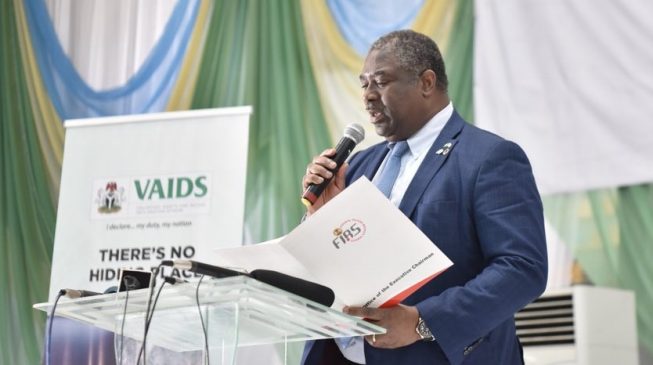 07:53 2019
Print This Article Share it With Friends
👤by Oluwatoyin Bayagbon  0 Comments
Advertisement

The Federal Inland Revenue Service (FIRS) says it has no plans to increase the rate of value added tax (VAT) from 5 percent to 50 percent.

The tax administration agency was reacting to reports that Babatunde Fowler, its chairman, had proposed that VAT increase to 50 percent.

Fowler allegedly made the recommendation during a session with members of the senate finance committee at the 2019-2021 medium term expenditure framework (MTEF) and fiscal strategy paper (FSP) in Abuja on Tuesday.

But in a statement signed by Wahab Gbadamosi, FIRS spokesperson, the agency said while Fowler suggested an increase in VAT rate by the end of the year, it was not by 50 percent.

The statement said the FIRS chairman was rather referring to a projected increase in the VAT collection rate of between 35 percent to 50 percent due to it’s “enforcement activities,” up from about 25 percent recorded over the last three years.


“What Fowler recommended is an increase in the number of individuals and business entities paying VAT,” the statement read.

“Fowler promised improved collection in CIT, Petroleum Profits Tax, (PPT) and VAT in 2019 relative to the collection performance of the Service in 2018.

“One issue about taxation is that it should be fair to all. We have discovered after VAIDS (Voluntary Assets and Income Declaration Scheme) that a high percentage of businesses are collecting VAT and not remitting.

“We’ve also tried to address this issue. We’ve issued new VAT certificates. We have appealed to the public that if they are charged VAT and they are not sure it had been remitted, they should contact us. We even gave a small promotion that for every 25 names that they give to us, we give them a little gift either a power bank or something to show appreciation.

“But that aside, we are also on the streets. We have a team called FEETT (Federal Engagement and Enlightenment Tax Teams) going around to confirm that businesses are registered for VAT.

“I believe with the substitution of over 50,000 bank accounts that we just started this week, I am sure that those businesses that have been collecting VAT and not remitting the same or not remitting any tax payment are beginning to ensure that the level of tax compliance is improved.

“I believe that by the end of this year, government and Nigerian people should be ready for an increase in VAT.”

TWITTER @thecableng
Copyright 2019 TheCable. All rights reserved. This material, and other digital content on this website, may not be reproduced, published, broadcast, rewritten or redistributed in whole or in part without prior express written permission from TheCable.
Tags
Babatunde FowlerCompanies Income TaxFIRSvat
Advertisement