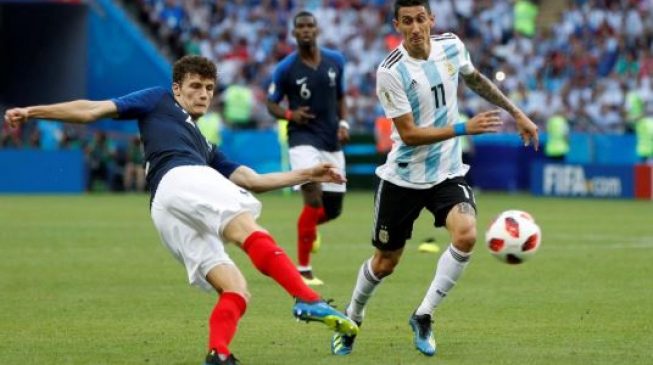 17:47 2018
Print This Article Share it With Friends
👤by Remi Sulola  0 Comments
Advertisement

Benjamin Pavard’s stunning strike for France in the 4-3 defeat of Argentina has been voted the best goal of the 2018 World Cup.

Over three million FIFA.com users voted in the poll which saw Pavard become the first European player to win the goal of the tournament accolade since inception in 2006.

“The ball bounced up as it came to me. I didn’t even think about it. I just tried to get over it and keep it down,” Pavard told FIFA.com after France’s Round of 16 thriller with Argentina.

“I was trying to hit it in the direction it came from, which is what the strikers always tell me. I didn’t think it over, and when it went in I just felt so happy.”

Other previous winners include Maxi Rodriguez (Argentina) and Diego Forlan (Uruguay), winning in 2006 and 2010 respectively.

TWITTER @thecableng
Copyright 2020 TheCable. All rights reserved. This material, and other digital content on this website, may not be reproduced, published, broadcast, rewritten or redistributed in whole or in part without prior express written permission from TheCable.
Tags
2018 FIFA World CupAHMED MUSAargentinaBenjamin PavardfranceSportSuper Eagles
Advertisement

‘Amotekun’: Yoruba have the right to protect themselves, Gani Adams writes Malami