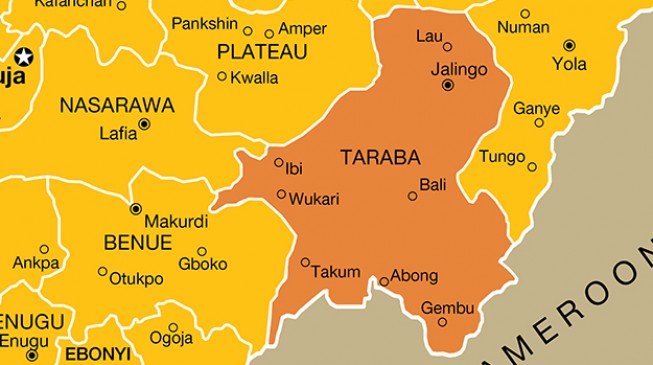 15:27 2017
Print This Article Share it With Friends
👤by Dyepkazah Shibayan  0 Comments
Advertisement

Elders in Fulani-dominated communities in Sardauna local government area of Taraba state have appealed to Acting President Yemi Osinbajo to declare a state of emergency in Taraba.

The state, which has recorded ethnic and religious crises in recent past, is yet again witnessing another round of violence, resulting to the deaths of over 100 people, and more than 15,000 cattle reportedly killed or rustled.

The elders alleged that a group called ‘Mun Nor Ambassadors of Peace’ was mobilised by John Yep, chairman of the local government, to attack them over the allegations that people from his ethnic group were being “attacked by the Fulani”.

They said without a state of emergency, the “protection of our remaining people” cannot be guaranteed.

“Nothing less than a judicial commission of inquiry ought to be instituted by the federal government and the United Nations due to the magnitude of these senseless killings,” they said in a statement.

“On the 16th of June, 2017 security personnel moved in the early hours and arrested some persons in Nguroje during which some suspected ringleaders of a group that has been fomenting trouble in the area got into the net of the security.

“On getting information about the development, the chairman of the local government, Mr. John Yep immediately led some Mambilla Youths to storm Nguroje alleging that the arrests was instigated by the Fulani. This led to a total siege on Nguroje and its environs.

“He ran across some villages mobilising his kinsmen under their militia group called ‘Mun Nor Ambassadors of Peace’ being the political attack dogs of a prominent politician from the area.

“Through this process, the council chairman was able to sell a dummy to his tribesmen across the entire local government painting a wrong and malicious picture that his kinsmen, the Mambilla ethnic group, was being attacked by the Fulanis.

“In fact, he made a personal radio message through the Taraba State Broadcasting Service (TSBS) Gembu Booster Station calling on his kinsmen to execute the genocide on the station’s transmissions of Saturday evening and Sunday morning respectively.

“What followed thereafter was a coordinated and simultaneous attack on over 300 Fulani communities.

“It has become necessary to call on the Acting President to as a matter of urgent national security evoke the relevant sections of the constitution and also do the needful by declaring emergency rule to allow for full-fledged emergency services and the protection of our remaining people.”

The Miyetti Allah Cattle Breeders Association of Nigeria (MACBAN) has also expressed shock over the development, accusing the state government of not doing enough to bring the situation under control.

Baba Ngelzarma, national secretary of the association, also called on the federal government to intervene.

“It is unfortunate to observe the attitude of Taraba state government in the face of this genocide,” he said in a statement.

“MACBAN condemns in strong terms this somewhat premeditated genocide and the silence or inaction on the part of the Taraba state government.

“We are calling on the relevant national security agencies to step up action in fortifying the area and ensure normalcy is returned.

“It is our firm belief that only a national judiciary commission of inquiry can unveil the true nature, motivation and magnitude of these barbaric acts of carnage and destruction.

“The federal government should as a matter urgency and justice institute one. MACBAN and indeed the affected Fulanis will not accept any window dressing approach by the Taraba state government in managing the crisis. ”

The people of Mambilla are yet to react to the allegations levelled against them.

TWITTER @thecableng
Copyright 2020 TheCable. All rights reserved. This material, and other digital content on this website, may not be reproduced, published, broadcast, rewritten or redistributed in whole or in part without prior express written permission from TheCable.
Tags
fulanitarabaYemi Osinbajo.
Advertisement