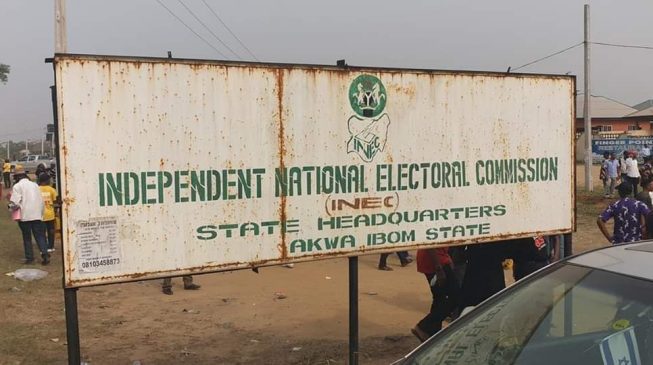 16:32 2019
Print This Article Share it With Friends
👤by Ebunoluwa Olafusi  0 Comments
Advertisement

Akwa Ibom Liberation Movement (AILM) has called on security agencies to protect officials of the Independent National Electoral Committee (INEC) and its facilities from being destroyed.

In a statement by Emmanuel Sam, leader of the group, AILM said the supporters of some politicians who are not satisfied with the outcome of Saturday’s elections are seeking to foment trouble.

The group alleged that miscreants working for Godswill Akpabio, former minority leader of the senate, are aiming “to set INEC facility in Ikot Ekpene and other places ablaze”.

The group appealed to the president to ensure no harm is done to any INEC facilities to forestall postponement of the forthcoming governorship election in the state.

“It is with utmost sense of urgency that we bring to your notice threat posed to facilities of the Independent National Electoral Commission (INEC) in Ikot Ekpene Local Government Area, by miscreants allegedly working for Senator Godswill Obot Akpabio,” the group said.

“Akpabio has created a security situation that has made it impossible for the declaration of a winner for the election in his senatorial district (Akwa Ibom North West). Hence, it is shocking to learn that some supporters and miscreants working for Senator Godswill Akpabio, are targeting INEC offices and staff across the state because the outcome of the election did not favour their benefactor.

“What has happened in Ikot Ekpene Senatorial District between February 23rd and 26th was directly contravening your stern order to the military and other security agencies against ballot box snatchers and other election riggers.

“Apparently, the Police and Army deployed to provide necessary security for INEC in Akwa Ibom State, in the eyes of many Akwa Ibomites, are not doing enough to execute your direct order.

“Consequently, we respectfully urge you to buttress your dignified stance against electoral malpractice and post election violence by directing the Acting Inspector General of Police and other securities agencies to work without preference to anyone or political party to forestall breakdown of law and order in the Akwa Ibom State during the March 9 elections.

“We urge the Nigeria Police Force to protect INEC facilities and its staff to ensure that the commission completes its lawful assignment in Akwa Ibom State.”

TWITTER @thecableng
Copyright 2020 TheCable. All rights reserved. This material, and other digital content on this website, may not be reproduced, published, broadcast, rewritten or redistributed in whole or in part without prior express written permission from TheCable.
Tags
Akwa Ibom Liberation MovementGodswill Akpabio. election violenceINEC facilities
Advertisement