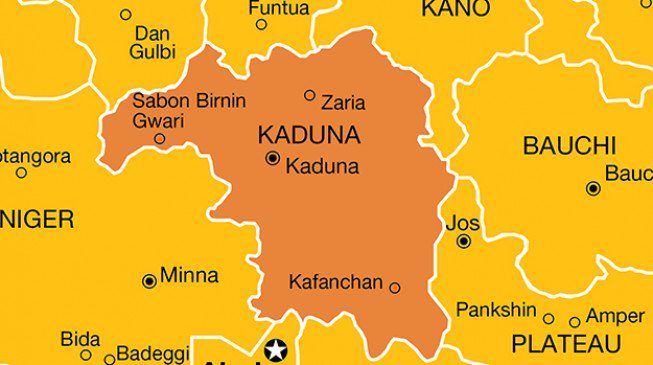 09:23 2020
Print This Article Share it With Friends
👤by Jamilah Nasir  0 Comments
Advertisement

About 35 people have been reportedly killed and another 58 abducted after suspected bandits invaded 10 communities in Chikun and Birnin Gwari local government areas of Kaduna state.

The gunmen were said to have invaded the villages and carried out the attacks on January 6, and subsequently demanded the payment of N100 million ransom for the release of their victims.

The attacks had caused some residents to panic and flee their homes, taking refuge in government schools and other communities.

Speaking when Jonathan Asake, president of Southern Kaduna Peoples Union (SOKAPU), visited victims of the attack on Monday at aschool, one Habila Sarkin Noma, a clergyman,  said the bandits had call  to say “we must  produce N100m as ransom if we want to have them alive”.

He alleged that the suspects were herdsmen who have been attacking the villages persistently, and “would grace on our crops and threatened to kill us if we protest”.

“Sometimes when they  attack and take captives, we will manage and pay ransom. Even after paying, sometimes they  kill the victims,” Habila said.

“But the attacks that took place on the 6th January, 2020, was the worst, they killed a about a total of 35 people and kidnapped a total of 58 people in 10 villages.”

According to him, the invaders came in hundreds and were well armed.

Addressing journalists during the visit, Asake asked the government and international community to come to the aid of the victims.

“As you can see from the way these people are, they are seriously traumatized and needed immediate assistance to be able to fold on,” he said.

“We have been told that the suspected bandits destroyed all their farm products and also destroyed their houses leaving them with nothing to call their own.

“Here at Ungwar Beji, there are about 200 of them with no food, beds or clothes while we are also been told that about 8,000 of them have converged at Buruku with nothing with them.

“Worst of all, most of the children are sick. This calls for concern on all people of good will to come to their aid in any kind in order to give them hope of survival before steps could be taken on the area of their education.”

TheCable could not independently verify details of the attack and casualties as calls placed to Yakubu Sabo, spokesman of the Kaduna state police command, were not answered.

TWITTER @thecableng
Copyright 2020 TheCable. All rights reserved. This material, and other digital content on this website, may not be reproduced, published, broadcast, rewritten or redistributed in whole or in part without prior express written permission from TheCable.
Tags
gunmenKadunaransom
Advertisement