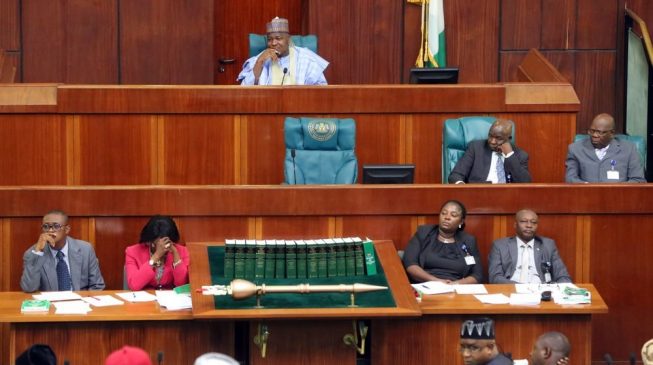 14:50 2018
Print This Article Share it With Friends
👤by Chinedu Asadu  0 Comments
Advertisement

The Human and Environmental Development Agenda (HEDA) resource centre has asked President Muhammadu Buhari to remove all “illegal ” allowances of members of the national assembly from the 2018 budget.

In a letter written to Buhari, HEDA also asked the president to retrieve all the previous monies which the lawmakers collected “illegally”.

HEDA recalled in the letter signed by Olanrewaju Suraju, its chairman, that Shehu Sani, a Kaunda senator, had said his colleagues in the senate collect N13.5 million as running cost.

It added that members of the house of representatives are also said to be taking home N11.5M million monthly as running cost.

“This is in the least, criminal, inhuman, cruel and corruption beyond imagination of observers of your government and its anti-corruption agenda,” the centre said.

“The Revenue Mobilisation, Allocation and Fiscal Commission (RMAFC) says monthly payment of N13.5m as running cost to senator is unknown to the commission and therefore illegal.”

Following the news of the senators’ pay, the commission had said the approved monthly payment of a senator is N1.6 million.

Ibrahim Mohammed, head of public relations at RMAFC, had said the remuneration act only covers salary and allowances but not running cost, and that the management of the National Assembly Service Commission could explain the N13.5 million running cost of each senator.

HEDA told the president that it believes the fight against corruption is still ongoing “leaving no room for any person to abuse public trust bestowed on him by engaging in corrupt practices, misappropriation of public funds.”

“On this account, HEDA hereby calls on Your Excellency to demand the removal of all those illegal allowances, including but not limited to the N13.5m, inserted in the 2018 budget and the retrieval of all the previous monies collected illegally by the lawmakers from all those affected, so that all loopholes that encourage corrupt practices could be blocked and prevented,” the letter read.

TWITTER @thecableng
Copyright 2020 TheCable. All rights reserved. This material, and other digital content on this website, may not be reproduced, published, broadcast, rewritten or redistributed in whole or in part without prior express written permission from TheCable.
Tags
HEDAhouse of representativesnational assemblyPresident Muhammadu Buharisenators
Advertisement