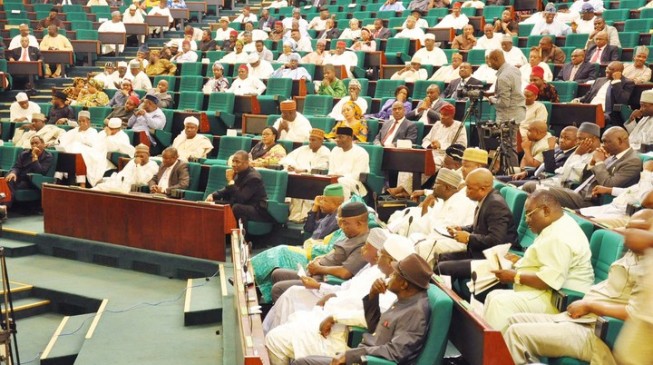 17:31 2014
Print This Article Share it With Friends
👤by Taiwo George  1 Comment
Advertisement

There was tension at the federal house of representatives on Tuesday, as the lawmakers got torn along party lines over the controversial $9.3m smuggled to South Africa for the procurement of arms.

The issue had been generating different reactions among Nigerians, particularly because Pastor Ayo Oritsejafor, president of the Christian Association of Nigeria (CAN), was linked with the aircraft that conveyed the money.

Though the Nigerian government presented documents to show that the deal was legal, South African authorities dismissed the explanation and promised to conduct a thorough investigation into the issue.

However, sitting commenced on a rowdy note for members of the lower chamber of the national assembly.

While legislators of the All Progressives Congress (APC) wanted the house to investigate the issue, those of the Peoples Democratic Party (PDP) kicked against the idea, saying it would amount to sheer waste of time.

Ismaila Kawu, the deputy minority leader, had moved a motion, asking the committees of defence and aviation to investigate the matter, but the opposition of the idea by the PDP forced their colleagues in the opposition to walk out of plenary in protest.

The aggrieved lawmakers alleged that their colleagues wanted to sweep the issue under the carpet.

Emeka Ihedioha, the deputy speaker who presided over the session, prevented a debate over the issue, saying it was better to refer it to a committee – a position that did not go down well with APC members.

Eventually, the lawmakers voted on the issue and majority of the members kicked against having a debate.

TWITTER @thecableng
Copyright 2020 TheCable. All rights reserved. This material, and other digital content on this website, may not be reproduced, published, broadcast, rewritten or redistributed in whole or in part without prior express written permission from TheCable.
Tags
$9.3 million arms dealhouse of representativesPastor Ayo OritsejaforSouth Africa
Advertisement