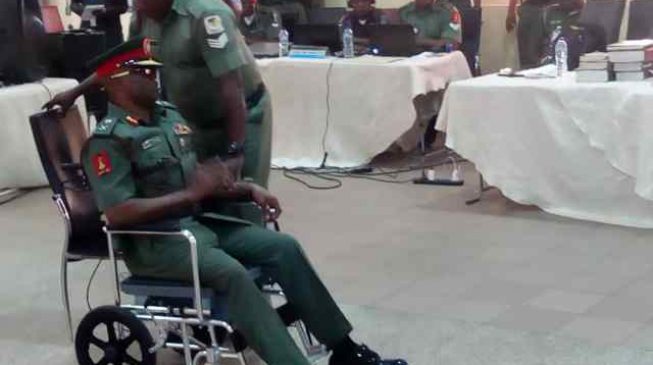 23:40 2019
Print This Article Share it With Friends
👤by Femi Owolabi  0 Comments
Advertisement

Hakeem Otiki, a major-general standing trial over the alleged theft of millions of naira, has asked Lamidi Adeosun, a lieutenant-general, not to preside over the case.

Five soldiers were declared wanted by the Nigerian army after they absconded with a large amount of cash allegedly on the orders of Otiki who was the general officer commanding of the army’s 8 division in Sokoto.

At the opening of a court-martial at the army officers’ mess, Asokoro in Abuja on Tuesday, Adeosun, appointed to preside, was met with objection from the defence of Otiki who claimed the soldiers, who are still at large, were Adeosun’s aides.

Journalists were reportedly barred from covering the proceedings, but Daily Trust reported that Femi Oyebanjo, a retired major and counsel to Otiki, argued that there has been an unending grudge between the two generals and in the interest of justice, Adeosun should recuse himself as the presiding officer.

“We have it on good authority that you bear grudge against our client. We have this deep feeling that he may not get a fair trial under your leadership,” he said.

“The reasons are as follows: it is a known fact that general Otiki got into Nigerian Defence Academy on 10th January 1983 while you got in on  4th July 1983. He got in there before you. It is a fact that General Otiki actually pitied you, established and trained you.

“We have this feeling that that grudge is still there. More so that general Otiki took over from you as the corp commander, infantry. We still believe that because this grudge has been there since then and because of this grudge, when you were promoted, lt. general, he sent you a text message to congratulate you but you did not respond.

“In addition to that sir, it is a fact that by the time we go into this trial proper, certain issues will certainly come up and these are issues that affect your office as chief of operations, Nigerian army which you left before you got to where you are presently. What am I staying sir, it is a fact, sir, that general Otiki as the GOC commanding 8 Division of the Nigerian army conducted operation Sharan Daji. He also conducted operation Harbin Kunama III.”

Oyebanjo said these were offices directly under Adeosun’s command as chief of operation, adding that the operations listed were going to come up in the course of the trial.

Arguing that Adeosun is an interested party, he said, “Finally sir, it is also a known fact,  that as at the time general Otiki took over from you as the corp commander infantry brigade, he inherited your security personnel, your soldiers that formed the inner security of general Otiki.

“These are the same personnel that formed the reasons why we are here. They are actually your soldiers, your personal aides; the soldiers he took over from you, these soldiers are the basis why we are here today. My lord, we say on the basis of all these, you are going to be part and parcel of this trial, we are going to to be talking and referring to you.

There were also speculations that the rift between the two generals was over who would succeed Tukur Buratai as chief of army staff.

Buhari had in July promoted Adeosun to the rank of lieutenant-general — same rank as Buratai, placing him in good stead to become the next army’s chief.

It was not immediately clear how the proceeding went. Sagir Musa, army’s spokesman, did not respond to TheCable’s inquiry over the court-martial.

TWITTER @thecableng
Copyright 2020 TheCable. All rights reserved. This material, and other digital content on this website, may not be reproduced, published, broadcast, rewritten or redistributed in whole or in part without prior express written permission from TheCable.
Tags
court-martialHakeem OtikiLamidi AdeosunNigerian Army
Advertisement