I have psychiatric disorder, says soldier ‘who raped’ Ondo student 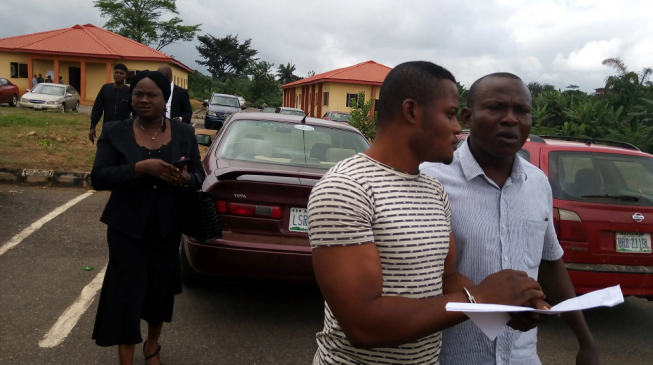 16:09 2019
Print This Article Share it With Friends
👤by Temitope Yakubu  0 Comments
Advertisement

Sunday Awolola (pictured left), the soldier who allegedly raped a female student of Adekunle Ajasin University, Akungba Akoko, Ondo state, has told a magistrate’s court in Akure that he has psychiatric disorder.

Awolola, through his counsel, Kayode Ikotun, said the army transferred him to Akure from Maiduguri, Borno state capital, to take care of his health and family.

Ikotun pleaded that the suspect, whose wife recently put to bed, should be granted bail.

He had filed a counter-affidavit to an application by Adeoye Adesegun, the prosecutor, who had demanded that the suspect be remanded in prison for the police to gather more facts.

Adesegun objected to the position of Ikotun and immediately told the court that it had no jurisdiction to hear the rape case.

Mayowa Olanipekun, the magistrate, thereafter ordered that the soldier should be remanded at the Olokuta Maximum Prison in Akure, pending legal advice from the ministry of justice.

Olanipekun also ordered that the original case file of the suspect should be duplicated in the office of department of public prosecution (DPP) of the ministry.

He then adjourned the case till November 15.

Speaking to journalists after the hearing, Olubunmi Akinola, one of the victim’s counsels, said they would await the legal advice from the DPP.

“Once the legal advice is out and the suspect has a case to answer, he will definitely be tried at the high court sitting in the state. All that the complainant want is for justice to be done; for the case not to be swept under the rug,” Akinola said.

TWITTER @thecableng
Copyright 2020 TheCable. All rights reserved. This material, and other digital content on this website, may not be reproduced, published, broadcast, rewritten or redistributed in whole or in part without prior express written permission from TheCable.
Tags
OndosoldierSunday Awolola
Advertisement