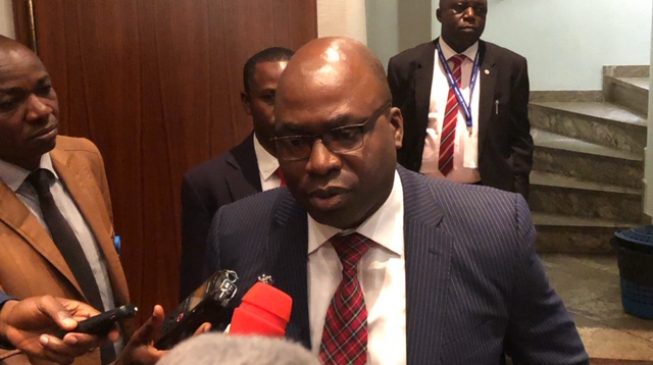 09:35 2019
Print This Article Share it With Friends
👤by Dyepkazah Shibayan  0 Comments
Advertisement

Owasanoye said this on Thursday in Abuja while giving a report on the tracking of constituency projects in the country.

The ICPC chairman said about a month ago, the commission prevented N9.2 billion from leaving government’s purse.

According to him, budget padding is still prevalent in the MDAs because “oversight is not strong enough”.

“We broke down the 2019 budget and we are going to announce publicly what project is allocated to each state,” he said.

“People can call ICPC and ask for it and we will tell them what project they should expect. This is much more effective way of fighting corruption.

“Part of our prevention mandate is to go into government agencies and look at how public fund is used. A month ago, we restrained N9.2bn from going out. What happened was that when we looked at the budget and what has been appropriated and how it was to be used, I can tell you authoritatively that there is still budget padding.

“This is because the oversight is not strong enough. If you have personnel vote that is not exhausted and people do not complain that salaries have not been paid, you can tell that someone has made budget proposal of more than what is needed to pay salary. The agency involved did not dispute it and we informed the ministry of finance, budget and national planning.

“The figure has moved because it is an ongoing exercise. As at this morning (Thursday), we found an additional N3.2bn. Hopefully, by the time we finish, we would have found more money and saved government personnel cost.”

TWITTER @thecableng
Copyright 2020 TheCable. All rights reserved. This material, and other digital content on this website, may not be reproduced, published, broadcast, rewritten or redistributed in whole or in part without prior express written permission from TheCable.
Tags
Bolaji Owasanoyebudget paddingICPC
Advertisement