Ahead of Anambra poll, IPOB insists Igbo must boycott ALL south-east elections 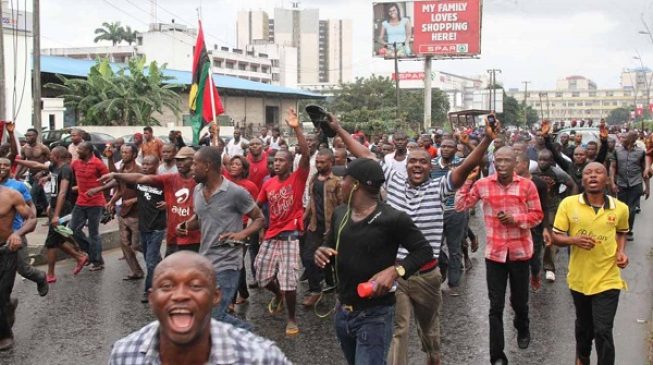 15:47 2017
Print This Article Share it With Friends
👤by Chinedu Asadu  0 Comments
Advertisement

The Indigenous People of Biafra (IPOB) has again asked the Igbo to boycott all elections that will be conducted in the south-east.

The group said beginning with the November 18 Anambra governorship election, there should be no voting in the region “to prove we are no longer interested in anything concerning Nigeria”.

IPOB had asked the government to conduct a referendum in the region concerning their quest for a sovereign state of Biafra.

The group had said until the exercise is conducted, no election will be held in the south-east. But it later backed down and called for a boycott of the elections.

In a statement sent to TheCable on Wednesday, the group also said Nnamdi Kanu remains its leader contrary to insinuations that he has been sacked.

The statement issued by Chika Edoziem read: “IPOB under the leadership of Mazi Nnamdi Kanu must maintain the stand to boycott every election in Biafraland.

“The Nigerian government’s new line of attack cannot alter our resolve to boycott every election, particularly this one on Saturday the 18th of November 2017.

“We are fully aware that Nigerian government used the unfounded and fabricated story of the sacking of our leader to deflect our attention away from organising resistance to the visit of Buhari.

“After we are done on Saturday in Anambra state, Nigerian government and her ruling corrupt cabal will understand how serious and determined IPOB is towards the liberation of our people.”

IPOB was declared a terrorist organisation by an Abuja court which also proscribed it on the request of the federal government.

TWITTER @thecableng
Copyright 2019 TheCable. All rights reserved. This material, and other digital content on this website, may not be reproduced, published, broadcast, rewritten or redistributed in whole or in part without prior express written permission from TheCable.
Tags
Anambra gov pollbiafraelectionsIPOB
Advertisement