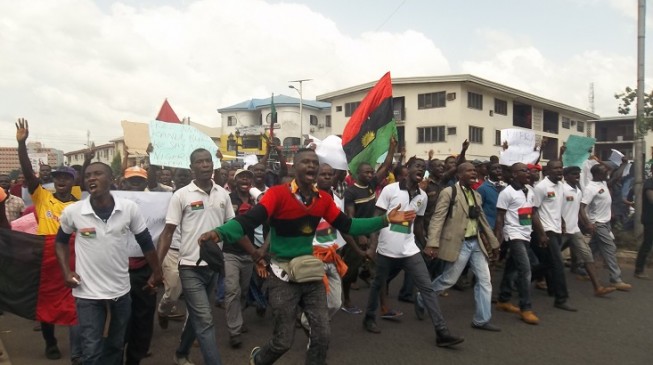 09:58 2016
Print This Article Share it With Friends
👤by Fredrick Nwabufo  0 Comments
Advertisement

‎Solomon Arase, inspector-general of police (IGP), has ordered the immediate disarmament of members of the Indigenous People of Biafra (IPOB).

Arase’s order followed the killing some police officers in Asaba, Delta state, by a mob of Biafra campaigners on Monday.

He gave the order to the heads of the police formations in the southeast, saying that IPOB had crossed the line.

“Following the manifestation of the disposition of the armed Independent People of Biafra (IPOB) activists to undertake premeditated attacks on Police officers engage in operations aimed at restoring public order in states in the south-east and south-south geopolitical zone of the country, the inspector-general of police,IGP Solomon E. Arase has directed the assistant inspectors general of police and the commissioners of police in the affected area to disarm members of the group operating firearms immediately,” a statement issued by Olabisi Kolawole, police spokesperson, on Tuesday, read.

“The IGP noted that the targeted attacks on Police personnel, who have been performing their statutory functions in the most professional and civil manner since the latest resurgence disorder, portrays the IPOB activists who are orchestrating the insurrection as having crossed the threshold in their misguided attempt to test the common will of the nation.

“IGP Arase, while condemning the killing by members of IPOB, also directed the arrest of any member of the group found in possession of firearm and bring him/her to deserved justice, while all IPOB activists arrested in connection with the killing of the Policemen should be charged to court for murder.”

The police say that they “will continue to diligently work towards eliminating any threat to internal security and assure Nigerians of their commitment to their safety and security.”‎

TWITTER @thecableng
Copyright 2020 TheCable. All rights reserved. This material, and other digital content on this website, may not be reproduced, published, broadcast, rewritten or redistributed in whole or in part without prior express written permission from TheCable.
Tags
biafraIPOBNigeria policeSolomon Arase
Advertisement